The Sparks and Lynx are about to tip off a rematch of last year's epic WNBA Finals. 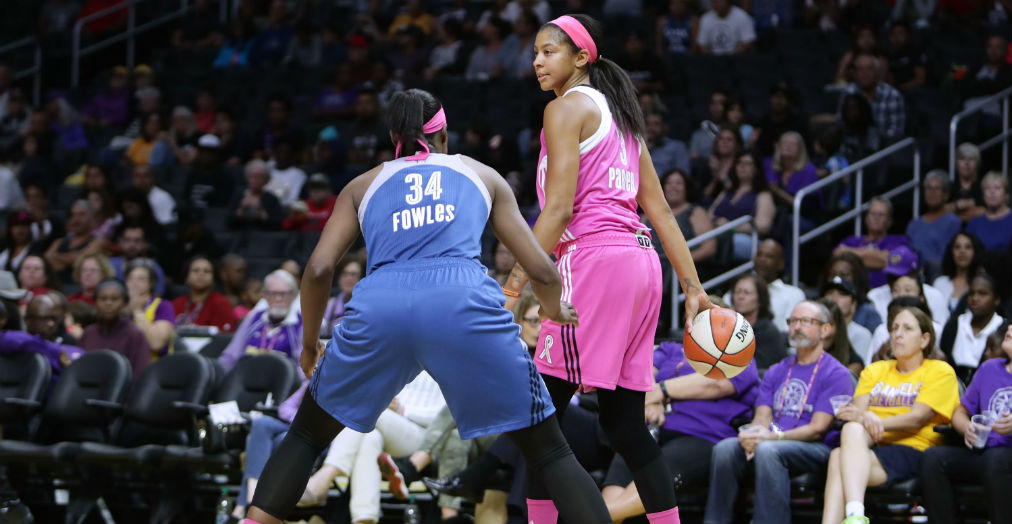 If anyone were to ask Candace Parker to describe the Los Angles Sparks’ objective in one word as they prepare for the WNBA Finals for the second consecutive season, she would most certainly use “control.” Today, Parker and the Sparks find themselves in familiar territory—Minnesota, about to match up against the Lynx—for two road games before returning to Staples Center on October 29.

After watching 2016 MVP Nneka Ogwumike hit that remarkable fade away put-back, giving the Sparks its third title in team history, Parker, who was named Finals MVP, ran over to celebrate with her teammates and dedicated her first title to Pat Summitt, her former college coach at Tennessee, who passed away from dementia last June.

But the championship hangover is long gone, and the Sparks know that the Lynx, still woeful after losing at home in Game 5, are looking forward to this series that much more, despite reaching the Finals in six of the last seven seasons.

“Our mindset has been to stay in the moment and worry about what you can control,” says Parker, a few minutes after the team’s practice on Friday afternoon. “We know we have our work cut out for us and we want to make things difficult and shots difficult for them on the offensive end—really control the tempo of the game.”

Look at the storylines from whatever angle and it’s obvious this isn’t just another WNBA Finals. Before today’s 3:30 p.m. EST tip-off, the Sparks and Lynx join the Houston Comets and New York Liberty (1999 and 2000) as the only two teams to have met in back-to-back Finals. As both teams are on the quest for another title, the winner would tie the Comets (1997-2000) for the most championships in WNBA history. The Sparks can also become the first team to win back-to-back titles since Lisa Leslie led LA to consecutive ones back in 2001-02.

The Sparks and Lynx met three times this season, with the Sparks winning two of those three, but both sides are familiar with each others’ play and know who the key factors are that make each side go.

“It is exciting,” says Sylvia Fowles, the League’s MVP, on facing the Sparks again in the Finals. “I try not to look at it like a rematch, but in the back of my head that’s hard to do.”

And, according to Fowles, the only thing missing to cap off her MVP season is the championship hardware.

“You have a lot of women who are fighting hard to get this title,” says Fowles. “So if there wasn’t a title attached to it, I think it would be somewhat pointless.”

Maya Moore is averaging 19 points and five assists per game in the postseason and is looking to bring another title back to the Twin Cities. But she’ll have to duel with Alana Beard, the 2017 Defensive Player of the Year, who’s appointed the task every game night of limiting Moore from filling up the stat sheet.

“It takes a team to guard Maya because she’s capable of doing so many things offensively [and] you can’t technically defend her with one person,” says Beard, someone she picked as the top five toughest women to guard in the W. “I have to do my job, but at the end of the day, it’s going to come down to how we defend her as a team.”

Beard’s ability to lock up the WNBA’s top scorers on a nightly basis led the Sparks to the League’s second best defensive rating (96 points per 100 possessions) during the regular season behind the Lynx (94.1).

There’s no coincidence that Moore averaged 10.7 points against the Sparks and shot 39 percent from the field and 22 percent from deep when both teams faced each other during the regular season.

“I know it sounds cliché, but it’s not something that I work for,” says Beard, on her prowess on the defensive side. “I don’t work to be noticed; I work because it’s my job and to help my team in the best way that I can.”

Both teams have four of the five last MVPs, but regular season accolades, advanced statistics and winning percentages are meaningless for two of the top teams with 0-0 in a series that requires a team to win three games to be crowned a champion.

“This is what we worked for and to see how this team has developed over the course of the year to where we’re in the Finals for the second year, it’s something that I hold close to my heart and that I’m excited for,” says Beard. “It would mean a ton to bring another championship to LA, but we have one game to win first.”