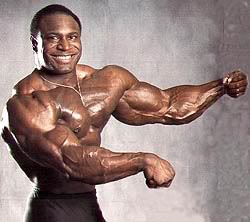 Training camps officially begin today, which here on The Links means one thing and one thing only: MuscleWatch 2009™.

What is MuscleWatch™? Well, I started doing this here on SLAMonline about six years ago, but in actuality, MuscleWatch™ started in the fall of 1995. Matt Harpring was playing basketball at Georgia Tech and was heading into his sophomore season. Suddenly, there were a bevy of stories in the Atlanta Journal-Constitution about how Harpring had spent the summer working out and had gained 15 pounds of muscle. My friend Matt and I thought it was strange that this was mentioned about two dozen times heading into the season, and even stranger that it was always mentioned as 15 pounds of muscle. Never 16, never 14, never 13, but always 15 pounds of muscle.

We took note of that, and suddenly we started seeing it everywhere: athletes from various sports all over the world were gaining 15 pounds of muscle. Once I started writing The Links, I noticed that magic “15 pounds” again showing up everywhere.

The suspicious thing to me is the number 15. Is that a target guys know they can reach? Is that just a good general number to throw out there? Is 15 impressive without being overwhelming?

“I was just watching a season preview on the Raptors on one of our sports channels (TheScore) and during an interview with Jay Triano, he was talking about how focused and involved Chris Bosh has been during the off season. And he also dropped the golden nugget that Bosh has gained 15 pounds of muscle. Boo yah.”

And yet now MuscleWatch™ is so much more — we’re not only looking for 15 pounds of muscle, but any extreme weight loss or gain. For instance, this morning in the NY Post, I read that Eddy Curry has lost 40 pounds (which puts him DOWN to 317 pounds).

But Linkstigator Ken Somolinos has been all over MuscleWatch™. Back in June he sent me a link about James Singleton putting on 10 pounds of muscle. I wrote Ken back and thanked him for the link and asked him to stay vigilant. He has, sending along all the following MuscleWatch™ links the last few weeks…

• Rudy Gay has allegedly added 20 pounds of muscle. (The article notes that this is in a bid to reach “one-name status” in the NBA. For his sake, hopefully that name is Rudy.)

• Caron Butler has lost 10 pounds this summer, though as Ken noted in his email, it doesn’t specify whether or not it was 10 ponds of muscle.

• Devin Harris is apparently 10-12 pounds heavier across the shoulders. This article ran a few weeks ago, so it’s possible Devin is now up to 15 pounds.

• Josh Smith lost 15 pounds, though he plans to put 5 back on. And in the same article, Mo Evans is vague about his MuscleWatch™ but says he plans to stay at a solid 220 all season.

• Al Jefferson is in the running for MuscleWatch™ lifetime achievement award, having lost 30 pounds since last season. What’s shocking is that this is the second time in his young career that Jefferson has dropped 30 pounds.

• Tim Duncan, because he is a robot, has lost exactly 15 pounds.

• And Deron Williams put on 5 pounds. Not sure if I would have predicted that Deron would feel the need to *gain* weight, but he did.

I also did some googling today, and found plenty more for MuscleWatch™ from media days around the League:

• In Boston, Big Baby has lost 20-25 pounds and Kendrick Perkins has lost about 15 pounds. The Big Baby weight loss is interesting because despite losing 20-25 pounds, this “does not necessarily mean he is that much lighter than his 289-pound playing weight (listed anyway) last year because he has added muscle in its place. He credits some of it to mixed martial arts training that he has embraced after watching his girlfriend do it in Houston.”

Also, Rajon Rondo has gained 11 pounds. Of fat? Nope. “All muscle, all muscle.”

• CJ Miles has added “at least 15 pounds of muscle.” There’s going to be a food shortage in Utah.

• In Chicago, Joakim Noah has added 6 pounds of muscle, which must make him look like Lee Haney. The same story notes that Luol Deng has also added 10 pounds, though we don’t know if it’s muscle or not.

• Mike Beasley not only went to rehab, he went to work, adding 10 pounds of muscle.

That’s it for now, but don’t worry, MuscleWatch™ never stops! And as always, if you see a MuscleWatch™ alert, send it to me.