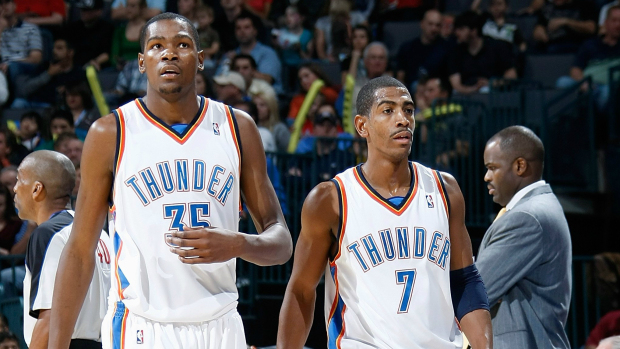 There have been plenty of reports over the last few days that Oklahoma City Thunder coach Scott Brooks is on the hot seat after his squad failed to make the playoffs this season. While Brooks is still the coach in OKC, a report by Adam Zagoria of SNY.tv says that the team is seriously considering replacing him with former Thunder player and current UConn head coach Kevin Ollie.

In his three years at UConn, Ollie has established himself as one of the best coaches in college basketball, as he has accrued a 72-33 record. He has won at least 20 games in each of his three years, and in 2013-14, Ollie led the Huskies to a national title. Ollie also has ties to the Thunder, as he played with the squad in 2009-10. He was a teammate of Kevin Durant, Russell Westbrook and Serge Ibaka during that time.

UConn coach Kevin Ollie is being “seriously considered” for the OKC coaching job, source close to the situation tells @SNYtv