Doin’ It In The Park

It began as a simple concept: The 24 best high school prospects in the world, regardless of class, together in one exhibition game. Not just the best seniors, best juniors, best sophomores—none of the groupings that you can find in most of the other all-star games in the summer circuit. The top 24, total. That’s it.

And now, nine years after the inaugural game tipped off, the Elite 24 is celebrating its 10th anniversary, having been played on both sides of the country and having featured some of the best up-and-coming talent summer basketball could possibly offer, with many of its participants going on to reach superstardom at both the collegiate and NBA levels. With the event reaching its first double-digit birthday on Saturday, August 22, it seems as good a time as ever to take a minute to reflect on just how far the Elite 24 competition has come over the previous decade.

In 2006, Kris Stone—a former SLAM ad salesman who was then the Associate Publisher of RISE Magazine and is now the Director of Sports Marketing at Under Armour—founded the game, making the historic Rucker Park its first host. Documenting the occasion was none other than Adam Yauch, also known as MCA of the legendary Beastie Boys, who made a film entitled Gunnin’ for That #1 Spot about the lead-up to the first ever Elite 24—along with plenty of footage of the game itself and mini-profiles of the cast of characters who participated, including future NBAers like Kevin Love, Brandon Jennings, Michael Beasley, Tyreke Evans, Lance Stephenson and many others.

And though the specific location of the game would change in years following, the precedent established and maintained to this date of playing the Elite 24 outside—with the exception of ’09, when it was moved indoors due to rain—helped it stand out from the usual summer tournaments played in gyms and arenas across the country.

“Playing basketball started at the park,” Stone says in Gunnin’. “It either started with your brother or it started with the older guys who you wanted to play with or fit in with, but at the end of the day, even if you’re playing in high school, you still go to the park to get in a run. That’s where you get tough and learn how to play the game.”

“I really think summer league is best when played outdoors, and I know the genie is out of the bottle, but I’m sick and tired of all these freezing, air-conditioned gyms for all these AAU tournaments,” says Tom Konchalski, an old-school scouting god who’s been to every Elite 24 that’s taken place in New York, minus the first one in ’06. “I really think summer basketball should be outdoors, and it loses something when it’s not.”

With honorary coaches Ben Gordon and Jason Kidd in tow, the first ever Elite 24 was dominated by uptempo play, featuring highlight-reel dunks from the aforementioned Jennings (who finished with 12 points and 15 assists) and JJ Hickson (34 points, 8 rebounds), both of whom shared co-MVP honors for the white squad. Michael Beasley (26 points, 9 boards) and Jerryd Bayless (15 points, 2 boards, 3 assists) split MVP honors for the opposing blue squad.

In the 2007 game, Stephenson and Evans were back again and one year older, battling one-on-one for much of the contest. Stephenson dropped 38 points, Evans scored 26, and Jennings set a yet-to-be-beaten Elite 24 assist record with a whopping 23 dimes. Stephenson was named co-MVP of his team with Jrue Holiday (who scored 24 points), while Evans and Jennings were named co-MVPs of their squad.

“It was like playing real streetball basketball,” Stephenson recently told us. “When you’re playing in Elite 24, you can earn your name—that’s where I earned my name Born Ready. The competition that you play against, especially since I was playing against the older guys—I was playing against high school guys, but they were also older than me. It was definitely special.

“I felt like playing in New York was a little easier for me because I was a little more used to it [than the other players],” the Coney Island native added. “I was used to the atmosphere, and it’s harder for other guys coming in from other cities, playing in Elite 24, because they weren’t used to the environment. I just fit right in.”

Rafer Alston and Baron Davis served as honorary coaches in ’07, with the game once again being played in Harlem’s Rucker Park as celebrities like rapper Fat Joe and college coach Jerry Tarkanian looked on from the stands.

The third iteration of the Elite 24 was also played at Rucker Park. It featured a defensively tight first half and a looser, faster second, with Maalik Wayns (10 points, 8 assists) and Stephenson (29 points—and yes, Born Ready participated in the Elite 24 for three consecutive years) shared co-MVP honors for one team while John Wall (10 points, multiple monster dunks) and Dominic Cheek (23 points, 7 rebounds) split it for the other. Kenny Anderson and Chauncey Billups, two NBA point guards of slightly different but overlapping eras, filled in as honorary coaches.

“I wanted to come [to the Elite 24] and make my name,” Wall told SLAM after the ’08 showdown, which served as an official coming out party for the PG after he had leaped onto scouts’ radars the previous summer. “I’ve worked hard at this. I remember last year looking at the rankings and seeing my name barely in the Top 100. I went to Coach and said, ‘Help me get better. What do I need to do to get better?’ And since then I’ve worked hard and now here I am.” 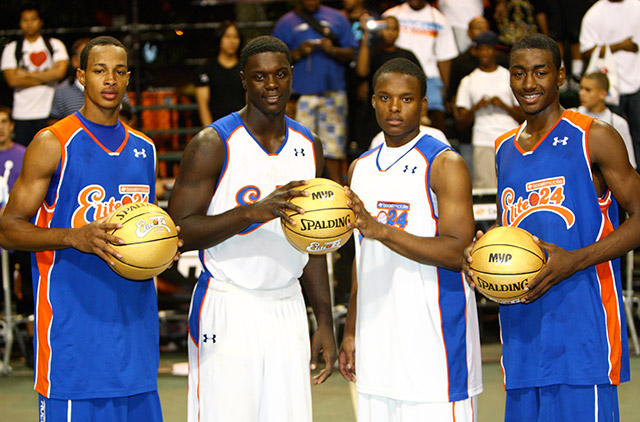 The 2009 game didn’t exactly go as planned. It rained through the day of the game, forcing a venue change away from famed Rucker Park and into Gauchos Gym in the Bronx at the very last minute. (The game couldn’t be delayed until a later date, with a telecast planned for the next day and many of the players leaving town that next morning.) Hundreds rushed from Rucker to Gauchos only to be turned away at the door—but eventually the game did indeed tip off inside the overheated and overflowing South Bronx gymnasium.

Local cats Doron Lamb (who hails from the Lower East Side of Manhattan) and Tobias Harris (Long Island) both played well, earning co-MVP honors for the white squad, while Josh Selby and CJ Leslie split the award for the opposition. (Harris and Lamb’s squad earned the W, though.) Selby had perhaps the night’s most memorable highlight, a huge dunk he threw down over (or alongside of, depending on your perspective) future UNC point guard Kendall Marshall. The gym erupted in cheers as Selby looked back at Marshall and flexed, yelling with all his might.

That said, after four years in the hoops Mecca, a change of scenery was in store. The 2010 game was moved to Venice Beach, CA, home to what might be the most competitive streetball on the left coast—and home to the best movie about streetball, ever. Word to Billy Hoyle.

“Moving the Boost Mobile Elite 24 to Venice Beach is a great opportunity to broaden its exposure nationwide,” James Brown, senior vice president of ESPN RISE (who hosted the event), said in a press release at the time. “We looked for a venue that kept with the premise of the game being played on an outdoor court, and there was no better venue to go to next than the Venice Beach courts. We will continue to look for other outdoor courts across the country to add to the experience of this great Rucker Park-launched event.”

The 2011 game was back in Venice Beach, though like the 2009 tilt it needed to be delayed—though not because of any weather-related issues. Michigan-bound big man Mitch McGary threw down a pre-game dunk that shattered the backboard, the glass of the hoop falling all over his body, leaving him with some nasty gashes and a new nickname: White Thunder. (He was previously White Chocolate, but with a monster slam comes a nickname upgrade.) “I got a pretty big laceration on my shoulder, but I’ll be aight,” McGary told ESPN moments after he was taped up. “I didn’t want to go to the hospital—I’m gonna go after, so I can watch my boys play.” 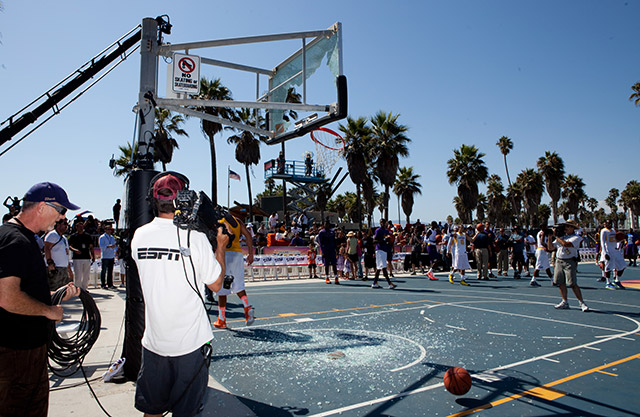 2012 was the year Under Armour came aboard as the title sponsor of the event—before that, Boost Mobile had been the primary sponsor. “Having supported the Elite 24 Game since the inaugural event in 2006 at Rucker Park by providing the teams with base layer, we feel now is the right time to outfit the players from head to toe,” Stone said in a press release at the time. (By then he was working full-time at UA.) “It’s a natural evolution as we continue to push forward and show our commitment to the basketball category and the next generation of great basketball players.”

“This is the best event of the summer,” Randle told SLAM after the game.

In 2013, the Elite 24 moved back east. Played in the Tobacco Warehouse just a few yards from the Brooklyn Bridge, the ’13 game was not just notable for what took place on the court, but the beautiful scene it took place within. The perfect view of the sun setting over New York City was gorgeous; the clear sky helped quell the fears of any Under Armour execs with dismal memories of scrambling for a place to play the game back in ’09. “It was a perfect night,” Konchalski says. “It was in the shadow of the Brooklyn Bridge and they had one stanchion of lights behind where the benches were on the bridge side, then when it got dark, the lights on the bridge came on—what a stunning visual effect it created.”

The actual game was pretty damn good, too. Brooklyn’s own Isaiah Whitehead scored a game-high 26 points, while Emmanuel Mudiay dropped 22 and announced his college intentions of SMU—key word being intentions, considering he wound up spending the year in China—during a halftime ceremony. Stanley Johnson, who’d go on to play for Arizona before getting drafted by the Detroit Pistons, put in 25 points.

Also worth noting was the dunk contest the night before the event, during which Theo Pinson threw one down by jumping over his own mother. Talk about a high-stakes situation. He won the competition, needless to say.

Last year’s game was moved to Pier 2, right in the middle of the beautiful, recently constructed Brooklyn Bridge Park. With a breathtaking view of the Manhattan skyline, the action itself didn’t disappoint, with scoring guards Malik Newman and Antonio Blakeney going at it and top-ranked wings Jaylen Brown and Josh Jackson facing up. Though the game was called with about two minutes remaining due to the threat of rain pouring down all over the court and audience, the crowd was also subjected to solid performances from Stephen Zimmerman, Thon Maker and Chase Jeter.

This year the Elite 24 is returning to Pier 2, where a new crop of up-and-comers will be showcasing their talents in the foreground of the lower Manhattan skyline.