Hall of Famer Jim Calhoun on the secret of building a national basketball powerhouse. Spoiler alert: it's about family. 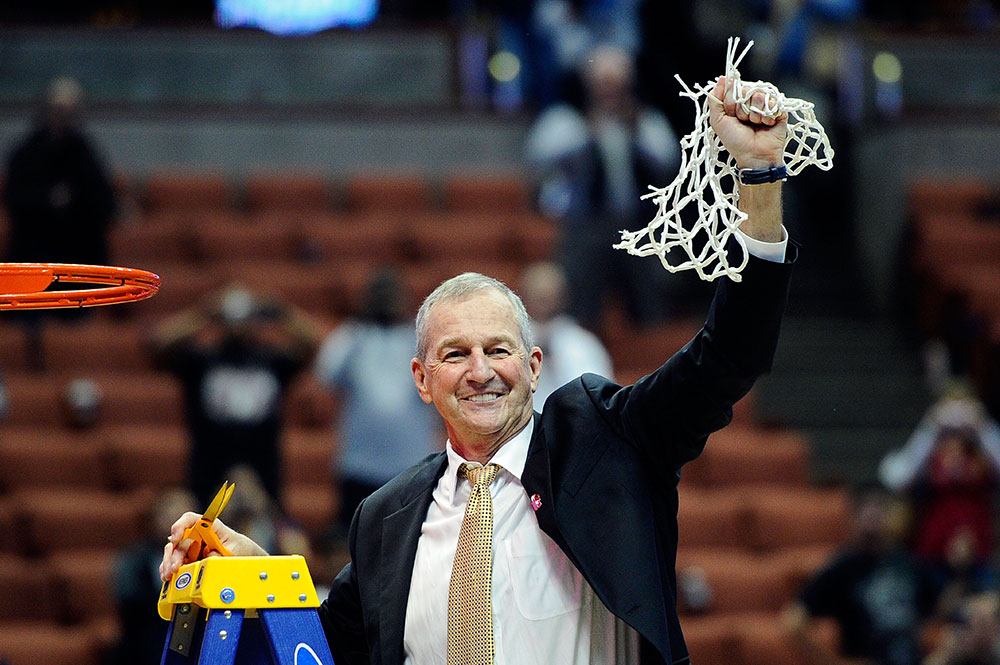 It’s the end of summer in 1957. A young Jim Calhoun is about to start his sophomore year of high school in Braintree, MA. He comes from a strong family, with four sisters and a brother. He’s a good baseball player. His father, an even better baseball player and accomplished boxer, is his hero. Then his father passes away.

Looking for a way to fill the void, Calhoun dives head-first into basketball. He quickly realizes that basketball can help him move on. It can give him a purpose. He can focus and work ferociously to better himself. Or he can play the game for fun, and pass the minutes that turn into hours that turn into days and then years of taking jumpshots.

Calhoun falls in love with the game. He devotes himself to it. He dedicates himself so much to it that he earns a basketball scholarship to Lowell State College in Lowell, MA, an hour from where he grew up. But knowing that his family was struggling, he returns home to find work as a stone cutter. He supports his family for 18 months. During that time, his love for the game never waivers.

He helps his family enough to be able to start his basketball journey again, this time at American International College in Springfield, MA, the birthplace of the game. He becomes an accomplished scorer and team leader.

By 1972, he secures his first major coaching job, at Northeastern University in Boston. His passion and drive help him move the program from Division II to Division I. Eventually, he helps his team to five NCAA Tournament appearances.

Now a grizzled vet, Coach Calhoun gets hired by the University of Connecticut in 1986. In 1995, after a loss to UCLA in the NCAA Tournament, the head coach of the UConn Huskies hugs his point guard Kevin Ollie, and says, “I’m proud of you Kevin. You did so much to get us here.”

In that moment, the result didn’t matter. Because through all those years of basketball, Jim Calhoun had learned something.

“I built my program at UConn and my programs for 40 years in college basketball on family,” Calhoun says. “And family’s basically about relationships. It’s about caring. The bonds of our relationship were much more important than the baskets, jumpshots, defense that [Kevin] played.”

Calhoun understood that his job was about more than basketball.

After Coach retired in 2012, he handed the reigns over to Ollie, crediting his toughness, experience and knowledge. “Thirteen years in the League without incredible talent. You don’t do that. Kevin did.”

Now Coach and his successor have teamed up with Dove Men+ Care to relive that moment from 1995.

“He said it changed his life,”Calhoun says of the hug. “Not sure if it did, or it didn’t. But I think it’s indicative of how you’re a hell of a lot more important than a jumpshot.”

Calhoun still has vivid memories of each era of Huskies. “The family’s the family,” he says.

He remembers going to recruit Ray Allen and Donyell Marshall. He can still see Emeka Okafor hitting the weight room every day. He recalls his pressing defenses of the ’80s, averaging over 10 steals a game. Then he remembers the nine-year stretch during the 2000s when his team led the nation in shot-blocking.

Calhoun’s memory is as razor sharp as his wit. He became a master at in-game adaptation. His ability to outcoach in-game is only outdone by his ability to teach and build relationships off the court.

When he got elected to the Hall of Fame in 2005, Coach remembers seeing five guys from the high school team he coached during the ’60s in Connecticut. And his players from Northeastern also showed up, even though by that point, he hadn’t coached there for 30 years. Everything that happens off the court for Coach Calhoun is a testament to a mentality he developed a long, long time ago.

“When I got there [the stone cutting job], I said, ‘I’m never gonna waste a day again.’ I lost my dad way too young. I’m not gonna waste a day ever again. Have I had bad days? Like everybody else, yeah. But I try to make sure that every day is a new opportunity.”

And each day Jim Calhoun spends time with the likes of Sam Jones, Bill Walton, John Havlicek, Jim Boeheim and John Thompson. He’s met three different Presidents. He’s traveled the world. After all of it, his love for the game never waivers.