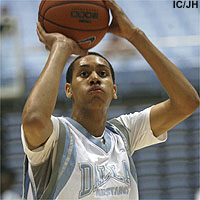 Baylor has just scored the biggest coup of the recruiting season, taking what was assumed to be a Kentucky recruit & adding a solid basketball player into the mix. Nolan Dennis is a Baylor Bear. SLAM broke the news & spoke with Nolan in the late hours of the evening for the scoop.

SLAM: What made you decide Baylor?
ND: The coaching staff. They’ve been recruiting me since the 8th grade. They have trusted me- going through all the ups and downs of recruiting and the entire time they’ve been by my side. I felt that the bond that I have with Coach Drew makes the fit perfect.

SLAM: That’s good. Was Coach Drew the main coach who recruited you from day one or were there others involved?
ND: It was Coach Drew, Coach Tang, Coach Mills… The entire coaching staff was a part of it and they were really loyal to me.

SLAM: Are you excited to play for a fast, young Baylor team with the offensive mindset they instill in their players?
ND: Oh yeah, Quincy, Tweety, Dunn, Jones… The entire team. It’s going to be a very good team next year. We are going to come in with good chemistry and I’ll bring another facet to the offense, another playmaker. We’re going to be a tough team in the BIG 12. I talked to the players, I was down there today, talked with the team and ran with them. That’s about it.

SLAM: Are you comfortable with the Baylor area yet?
ND: I went to Baylor Elite Camp, so I’ve been down there quite a few times. I just feel comfortable now, I just enjoy the idea of going to school there, being in that Baylor atmosphere.

SLAM: Do you have any goals for what you want to contribute to the team from day 1?
ND: Yeah! I have tons of goals, I mean we can go on and on. I hope I can get BIG 12 freshman of the year, defensive player of the year. I want our team to get to the NCAA tournament, but not just get there and bow out happily… I want to get deep runs in the tournament. I know they’re lofty goals, but I think you have to aim high to achieve a lot as a freshman.

SLAM: I’m guessing you believe Baylor can take that next step up and move into the top echelon of the BIG 12 next season?
ND: I think it’s going to happen. In the past few years, we’ve had some great players coming into the program. Last year, they made it to the championship of the NIT- we just need to push through that wall and get to the NCAA tournament. Like I said, I want us to get a deep run.

Special thanks to national basketball scout Patrick Stanwood for the tip.