The senior point guard chooses the Huskies over Providence. 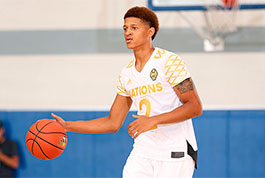 Following a weekend-visit to UConn, Makai Ashton-Langford decided he had seen all he needed to make his college decision on Monday, when he committed to the Huskies after also seriously considering Providence. The 6-1 senior point guard hoops at Cushing Academy in Ashburnham, Massachusetts.He averaged 15.5 points and 3.3 assists on the Adidas Gauntlet circuit in the spring and summer.

More info from the Hartford Courant:

Makai Ashton-Langford was a UConn fan growing up, but when it came to deciding on a college, he knew he had to take the emotional investment out of it.

“UConn was one of my favorite schools,” said Langford, a point guard, considered a four-star recruit in the Class of 2017, “but when I started being recruited, I put that in the back of my mind and everything was going to be even. When it came down to UConn and Providence, it was 50-50 – that’s how close it was.”

Ashton-Langford, 6-foot-1, from Worcester, Mass., ranked 33rd by ESPN, visited Providence last week, and UConn over the weekend. After sleeping on it and discussing it with family, he informed UConn coaches on Monday afternoon that he was going to be a Husky.

“It just felt like a home to me,” he said. “It felt like it was a place I could be at, and I think Coach [Kevin] Ollie, he played in the NBA as a point guard, can be a guy who really shows me the right way to play.”

Ashton-Langford is UConn’s first commit for the Class of 2017. He is moving from Cushing to Brewster Academy this season, to play against Triple A prep school competition.

Sophomore Jalen Adams, who played on Ashton-Langford’s AAU team, Mass Rivals, and also played at Cushing and Brewster, was the host for his visit this weekend. Adams had an up-and-down freshman season, but his 70-foot, game-tying shot in the American Athletic Conference Tournament made national news and ignited the Huskies’ run to the conference title.

“That was a big part of [my decision],” Ashton-Langford said. “Seeing what he did last year, practically putting UConn in the [NCAA] tournament with that shot. He was telling me I could trust Coach Ollie, and that he would lead me in the right direction.”