There is no true beginning to this. Untitled, unmastered. It was just a shoe then. An idea. An extended concept from an existing sneaker named after something the man himself had revolutionized.

At the time of the concept’s inception, Michael Jordan was more ideology than star. The idea of what he had the ability to become exceeded what he actually was. David Falk oversold his client to the one non-NBA company that had Jordan’s future in its hands. Nike was brilliant enough to have signed Jordan but had no idea how deep the audacity of thought ran through Falk and Jordan about what they felt they deserved.

The Blazer was George Gervin’s shoe. It was worn by so many other stars, but it was directly associated with Iceman because of the iconic image of him sitting on a throne of ice. The Legend was a shoe making rounds on damn near every playground while also being the “black power” shoe that Georgetown wore while showing the sports world what new defiance looked like. And the Air Force 1 was the Air Force 1. Too epic in stature for just one athlete to lay claim.

At the least, it was one of the most ambitious moves in the history of the game. The arrogance of it all. But Falk knew what he had and Jordan knew what he had inside of him. All that was left was proof. And for Jordan, that part came easy. 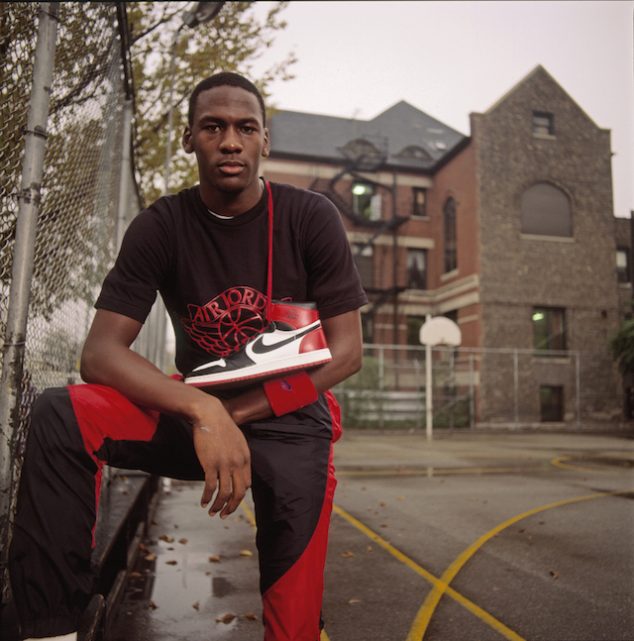 David Letterman (holding an original Air Jordan 1 in his hand): “Is this the shoe that the NBA wouldn’t let you wear? Now why wouldn’t they let you wear it? Just because it’s ugly, for starters, doesn’t…”

Jordan: “Yeah, I agree with you they are ugly.”

“Now wait a minute, didn’t you help design these?”

“Well, what’s wrong with the coloring? What rule did we violate here?”

“Well, it doesn’t have any white in it.”

“Well, neither does the NBA.”

The Black Toe. That was the first Air Jordan I that Money wore. But it wasn’t the sneaker that caused the ban. The shoe that caused Russ Granik’s office to draft a letter to then-Nike VP Rob Strasser four months after Jordan broke the shoe “color barrier” was the Nike Air Ship. But understand, Nike first, foremost and always is a marketing company. And there was no better way to introduce a new shoe/new concept/new ideology to the marketplace than to “redirect” the story to make it about a future campaign as opposed to a history lesson of an unmarketable past. Nike was not about to put the Air Ship on the shelves. Nike was about to try to sell a shoe with Jordan’s name on it to millions. It needed a narrative. An anti-establishment narrative that one shoe had, but another didn’t. That’s not lying; that’s genius marketing.

The shoe was introduced to us hanging over his shoulders. Pick-up game style on the Chicago greytop. No wings—the original originals didn’t have a Jordan “basketball with wings” logo on the side ankle panel. Just a name. His, preceded by Air.

From there, shit got really, really real. He started doing things in that shoe we’d never seen before. It’s not like he was winning chips like Magic or erasing basketball stereotypes like Bird, but what Jordan began to do once those Jordan Is were officially on his feet was literally the beginning of him making a damn shoe almost as important as he was.

As “ugly” as the shoe was, it was beautiful. On the court it was so distinctive it made Jordan that much more identifiable while he was playing. As kids who were the same age as Mike who had to sneak into Chicago Stadium to see him and had to watch him from the 500 Level where the cops weren’t looking, we’d ID him by his shoes first. Or watching his games on some fish-eyed 17-inch screen TV that had aluminum foil on the tips of non-functional antennas, we’d find him by looking for the shoes first. Don’t believe? Peep an old Bulls YouTube clip. Can’t distinguish Mike from anyone else? Can’t immediately find him? Look down. Check that 1985 NBA All-Star Game where everyone was wearing like-minded unis and he looked like everyone else in the game. Just look for the shoes. The Is stood out like Becky with the Good Hair at Roscoe’s in Oakland. Them AJ Is could easily be credited with the modern day invention of color blocking.

Especially when he wore the ones with the “white in it.” 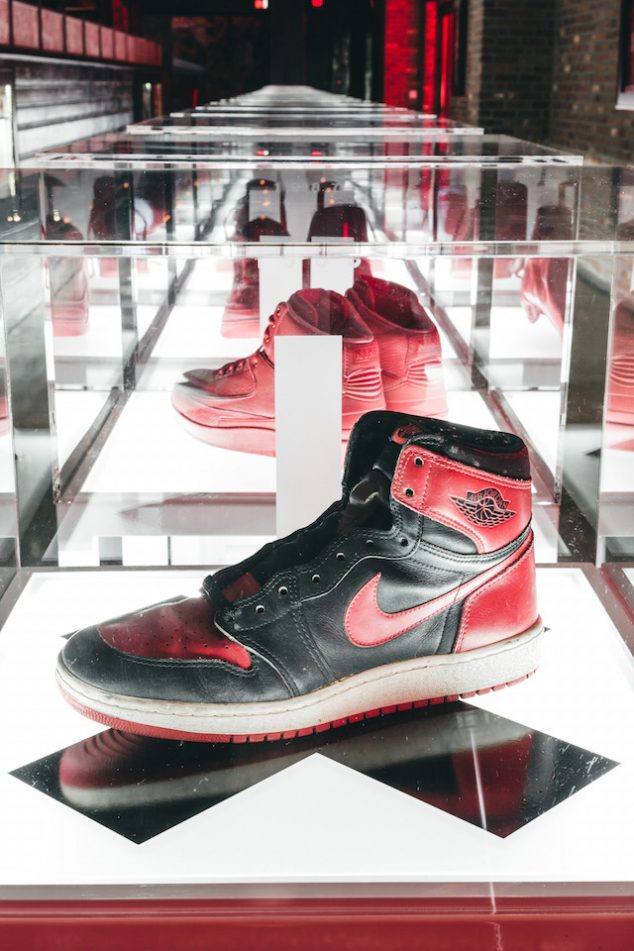 Nike history should be broken down no different from our own. Biblical. BC/AD. Theirs: PT/OT.

The Jordan I legacy as a single shoe holds weight mainly because it is the first Pre-Tinker shoe. Only two exist. Once Tinker created the Jordan III, life in this shoe game would change forever.

The storytelling of the shoe over the years is what is unparalleled and unmatched by anything else in the game. Both the releases and re-releases of the shoe that tell new stories and relive others. From the Laneys that never happened to the Shattered Backboards that did. To the 25 lasered autographed ones that exist to the rarified “Lance Mountain” SBs to being the next bespoke sneak cooked up in NikeLab’s 21 Mercer NYC location. To being the cover shoe for one of the greatest sneaker books ever produced, Intercity’s Art and Sole. An honor no other shoe can claim.

By design and status, it lends itself to art in ways no other shoes can or have. But unlike, say, the Air Force 1 or New Balance 574 or Nike SB Dunk or a pair of adidas Stan Smiths, most artists are scared to touch the Jordan I, to use it as canvas to create something different. Either they treat it as “sacred” or say it’s designed “perfectly as is.” Not even the Jordan III gets that “off-limits” respect. (But the Jordan XI kinda does, too, if we’re being totally honest.)

The ban gave the Jordan I a foundation. A moral center. But to this day (despite the reminder on the sole of the new Jordan XXXI), it doesn’t define the total meaning and significance of the shoe. Much the same way Muhammad Ali being banned from boxing wasn’t the full definition of him, just an integral part in the life of who he was, the same holds true with the Jordan I.

As the years have gone by, the place it holds in culture has risen to a space only few sneaks ever reach. The Converse Chuck Taylor, the AF1, the adidas Superstar and Pro Model (the Stan Smith has recently entered into that exclusive club) may be the only others. It is Mount Rushmore material—more specifically, the Jordan I is Lincoln. One of the very, very few that has both relevance and reverence 30 years after it was born—while never once losing stature or having society second-guess or question its significance.

The Jordan I is one of the few shoes since man and woman began wearing shoes where the statement, “It’s better to have four rubber wheels than two rubber heels” does not apply.

As I wrote in the book Sole Provider: It was about…something beyond basketball. 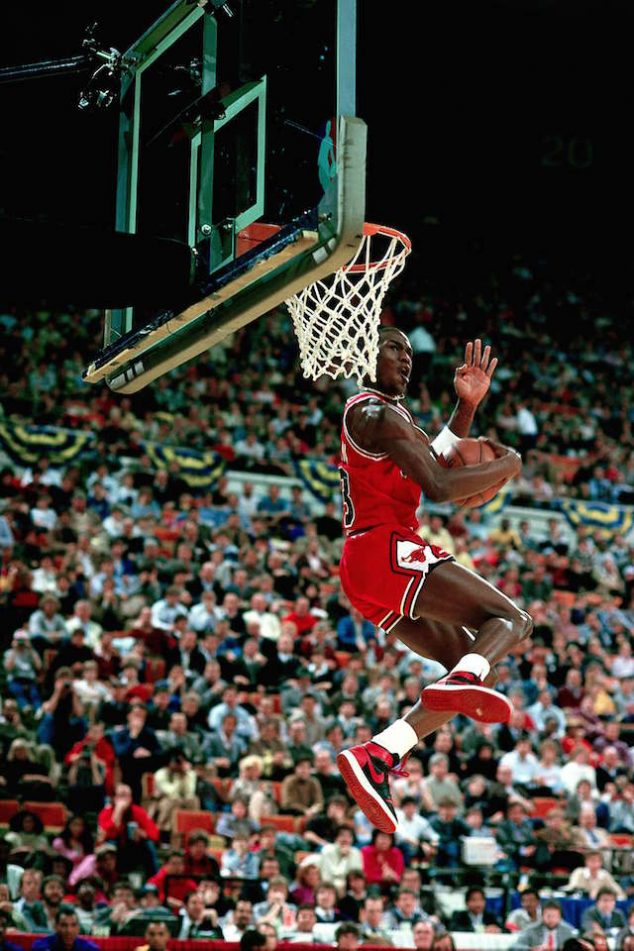 The Jordan I “Banned” colorway returns to retail on Saturday, September 3 for $160. Images via Jordan Brand.