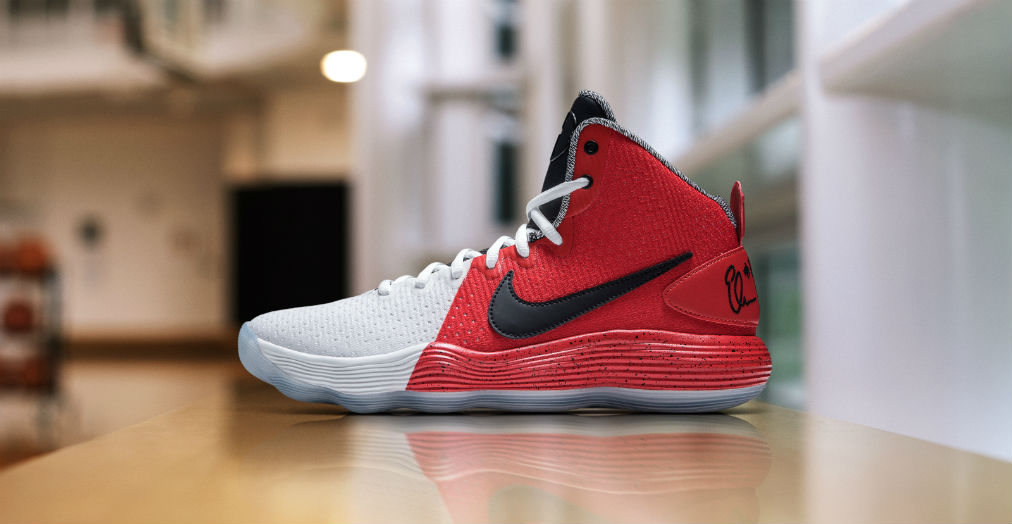 Elena Delle Donne released a pair of personalized 2016 Nike Hyperdunks last December. When we spoke to the former MVP about the white and blue pair, her love for sneakers came up. She said that the Nike Air Swoopes, Hall of Famer Sheryl Swoopes‘ signature sneaker, was her favorite of all time.

“I had wanted to wear a female shoe for as long as I can remember,” Delle Donne told us. “So when [the Air Swoopes] came out, I was probably the most obnoxious kid to my mom and my dad, just whining to get out there and get that shoe. Then the second I got the shoe, they couldn’t get me inside because I was outside playing so much. I remember the importance of that moment in my young career.”

“This shoe is truly inspired by my favorite basketball player of all time, Sheryl Swoopes,” notes Delle Donne. “There are a lot of pieces in the shoe that represent the Swoopes 1. If you look at the inside pattern of this Hyperdunk, it has the same pattern as on the Swoopes 1. My favorite part is the tab on the back of the heel, which was a signature element of the shoe.”

Her Hyperdunk 17 PE comes in a color-blocked white and red, with black accents on the Swoosh and tongue logo. The heel that she references is made out of suede and has a “1” on either sneaker, a reference to Delle Donne’s number 11 and the Air Swoopes 1. The sneaker’s translucent outsole features “DEMAND” on the left and “EXCELLENCE” on the right and the inner tongue has an embossed replica of Delle Donne’s tattoo. EDD got the ink as a tribute to sister Lizzie, who is both blind and deaf.

Swoopes is most definitely feeling the love.

I am truly humbled @De11eDonne! Thank you for carrying the torch and reppin' for all of us!#Imafan#RESPECT#BLESSED https://t.co/5UliJEQlUn

These will go on sale on November 4 at Nike.com.