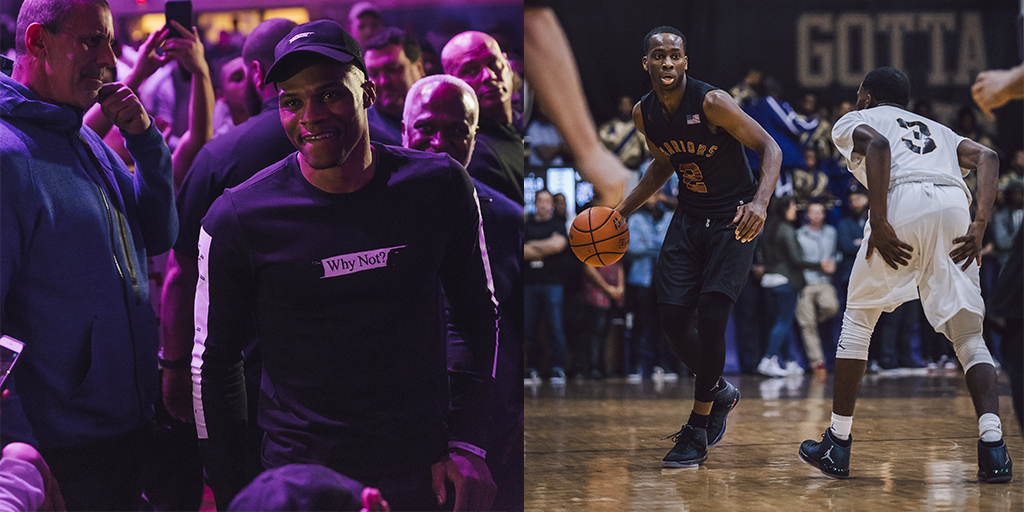 The glitz and glamour of NBA All-Star Weekend is typically centered around its host city’s downtown area, with lavish hotels and swanky clubs serving as event venues. But on the Thursday before the mainstream festivities really began this year in New Orleans, Jordan Brand hosted what’s quietly become the most pure—and most fun—event of All-Star Weekend (arguably even better than the official NBA stuff this time around). And it wasn’t at a nightclub, nor did it feature cocktails with basketball puns for names. No one was pushing everyone that walked in the door to use a certain hashtag on social media. There were no free gifts, save for a reserved seat opposite the home team’s bench.

Instead, at St. Augustine High School in NOLA’s 7th Ward, the second annual Jordan Brand Invitational was as good as it was simple: A high school basketball doubleheader, with real fans in the stands and real hoop being played on the court.

Sure, giant Jordan logos adorned the gym’s walls and every player was outfitted in Air Jordan XXXIs—which looked amazing glistening under the bright lights, by the way—but at its core, this night was about the ball. Crescent City faced off against St. Aug in the first game, while national powerhouse Oak Hill took on Baton Rouge’s Scotlandville in the second game, in what was billed as a matchup of top PGs: Texas commit Matt Coleman vs. Class of 2018 stud Ja’Vonte Smart. The specifics of the games were unimportant (though if you’re wondering, Oak Hill is utterly eye-popping to watch in person).

During a weekend that often feels forced, this felt organic.

Last year’s inaugural such event in Toronto had potential, but it lacked a level of authenticity that was apparent the moment you walked into St. Aug’s home gym this year. For the players, getting the chance to play in front of Russell Westbrook, Kemba Walker and Frank Kaminsky—all off whom sat courtside—was a thrill, even for a school whose alums include NBAers Avery Johnson and Kerry Kittles, plus former Oklahoma star PG Hollis Price.

“We’re going to enjoy this moment,” Westbrook told SLAM, minutes before surprising the packed-out gym and engaging the raucous crowd with an extended dance session, as the DJ blasted Cash Money and Lil Uzi Vert records.

When he gets the chance to be around high schoolers, Westbrook said, his message to them is simple: Be yourself. “I think that’s the most important part, especially at this age, because you never know what your life can turn out to be, what you can be. Everybody’s not going to make it to the NBA, but I think this moment and this experience is great for them, just to interact and have fun and be themselves.”

It was a breath of fresh air for Westbrook, who was about to have a whirlwind of a weekend himself.

“I’m just excited to see high school basketball,” Westbrook said before the Oak Hill game, “because I don’t get to see it that much. It’s great for me, to come back and be able to see kids and see how excited they are about the game of basketball, and enjoying it and competing at a high level, that’s something that I enjoy. Just seeing kids playing the right way.”

As for that aforementioned thrill for the players to potentially show out in front of an NBA player like him, Westbrook remembered the only time he had that chance as a high school player at Leuzinger HS in Lawndale, CA.

“Yeah, one time, Dorell Wright, because he went to our school, he came back and watched us in the playoffs one time, and I was shitty,” Westbrook said with a laugh. “So I know it’s tough, you want to play well. Hopefully all these kids have fun and enjoy this moment.”

They did. And so did we.