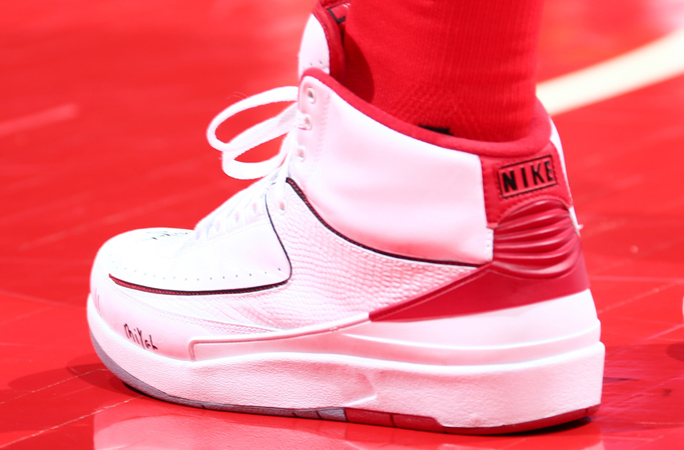 A night after Andre Drummond wore the Air Jordan II ‘Radio Raheems,’ John Wall wore pair in the classic ‘White/Red’ colorway against the Denver Nuggets. This was one of the highlights in an evening of kicks that featured some truly notable models.

In keeping with the Jordan theme, Jordan Clarkson broke out a pair of the classic “Infrared” Air Jordan VI Retros while Arron Afflalo continued to ball in the ‘OVO’ Air Jordan X Retros.

Foamposite fans were treated to some quality pairs and they both came courtesy of the Raptors. DeMar DeRozan took the floor in the ‘Wheat’ Foamposite Ones while James Johnson rocked the ‘Black’ joints. Both players also wore secondary pairs with DeRozan rocking the ‘Rose Gold’ Nike Kobe X Elite and Johnson bringing out an all-white NikeiD KD 7.

For the latest recap of the night in NBA kicks, you’ve come to the right place.