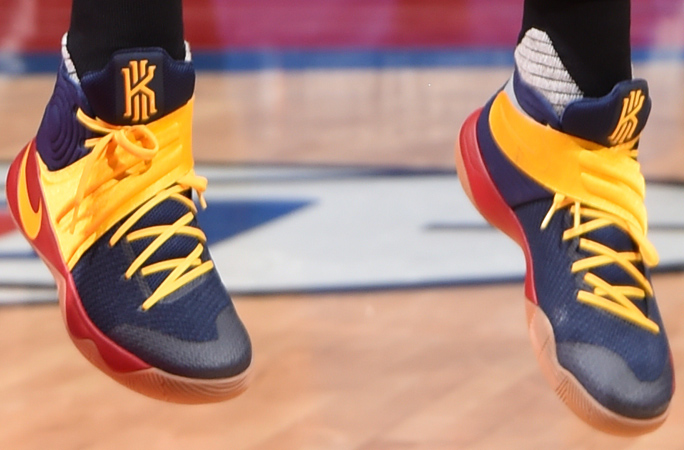 About a year ago, Kyrie Irving dropped a career high 57 points in an overtime win against the San Antonio Spurs. To commemorate that moment, Nike released a special colorway of the Nike Kyrie 2 featuring the same colors of the Kyrie 1 PE Irving wore that evening and dubbed it the “Ky-reer High.” In last night’s game against the Clippers, Irving wore that pair in helping lead the Cavs to a win. In defeat, Chris Paul wore a mostly white pair of his signature model, the Jordan CP3.IX.

In Sunday night’s other sneaker news, Jose Calderon, wearing the orange pair of adidas Crazylight Boost 2015s he’s worn all season, buried the Lakers with a last second 3-pointer that sent the Knicks to a 90-87 victory. In Sacramento, DeMarcus Cousins and Rudy Gay went with a Charles Barkley theme as both players rocked signature models of the “Round Mound of Rebound.” Cousins once again wore the CB34 while Gay rocked the CB ’94. Last but not least, Donald Sloan of the Nets went with a ’90s favorite when he brought out the Nike Air Flight One against the Milwaukee Bucks.

For the rest of the night in kicks, make sure to run through our latest gallery.