We spoke with the Yonkers MC about playing basketball with rappers, shooting commercials with Allen Iverson and more. 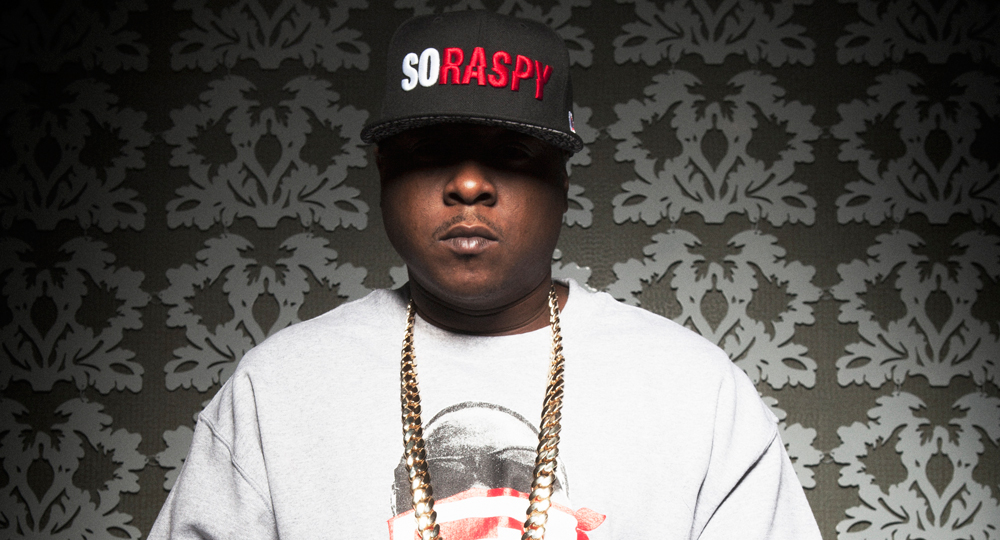 Assuming you were of a certain age in the early 2000s—between about 10 and, I don’t know, 35?—New York rapper Jadakiss will forever bring to mind a pair of iconic Reebok/Allen Iverson commercials. “They even put a zone in the League to try to stop him,” Kiss rapped in the first of the two, cementing AI’s status as the most unguardable young scorer in the NBA. At that time, the Yonkers-bred MC was coming off his debut solo album, Kiss tha Game Goodbye, and while literally hundreds of rappers have came and went in the decade-plus since, Jadakiss’ consistent output has helped him stick around as a perpetual rap heavyweight ever-embedded in the NYC hip-hop scene.

We caught up with Jadakiss at his Westchester studio to talk about those Reebok spots, hooping with other rappers and plenty more.

SLAM: What’s your personal basketball history like? Did you play in school when you were younger?

Jadakiss: Yeah, I played little league, high school, AAU, PAL—all of the above. Point guard, like a distributor. I really didn’t start scoring until I got out of high school, then I started shooting. I was always pass-first.

SLAM: You must’ve been decent if you were playing AAU.

Jadakiss: I mean, I was slow. I was good, though, considering the competition. I was short and slow, but I had good court vision, good handle—I know how to run the team.

SLAM: Did you have dreams to go pro?

Jadakiss: Nah, pro was a little far-fetched. My lifetime dream was to play for Syracuse, for the Orange. Until about 10th grade, until I knew it was over. I still wanted to go there academically and walk on.

SLAM: At what point did you become conscious of the hip-hop/basketball crossover?

Jadakiss: You know, after we were signed by Bad Boy, we were able to start meeting professional athletes and all of that. You see how much rappers wanted to be athletes and how much athletes with they were rappers. It’s a crazy, crazy thing. I’ve got Double-A—Alan Anderson of the Nets—hitting me right now. He said he needs some music before the game. I’ll show you the text: ‘I need them bars. Yo, Kiss—I need them bars, man!’ I said, ‘Double-A, I got you. I got you.’

SLAM: Did you have any interactions with NBA players early in your career that stand out to you?

Jadakiss: From the first initial jumpoff, it was Jalen [Rose] and [Chris] Webber. They embraced us, showed us wild love. AI, of course. And then Melo—I stayed watching Melo because he went to Syracuse and won the Chip for me [Kiss is a huge ‘Cuse fan.—Ed.], so once I was able to meet him, we just linked up like fam. Jason Terry, he just called me a little while ago, ‘Come to the game in Philly next week.’ Just to see how much they rap off the court and how much they love music is a major thing for me. They always got the iPod—they need music at all times in the locker room, in the crib, in the hotel, in the party bus. They’re just big music heads. That’s a good thing. Shaq bought 10,000 copies of my first or second album. Then he was on Tha Basement with Big Tigger and told people, ‘Go get Jadakiss’ album.’ That’s like priceless to have them in your corner like that.

SLAM: You starred in those iconic Reebok commercials with Allen Iverson. What do you remember from that experience?

Jadakiss: Oh yeah, that was great. Steve Stoute put a lot of them together. The good people over at Reebok called me—it wasn’t too watered down. Shout out to Trackmasters, they did the tracks. [Reebok] really let me do my thing. They told me about the sneaker, about the technology of the sneaker, and the rest was just my knowledge of AI. That was a good thing. We did two of them. The A5 and the A6.

SLAM: At that point AI was on top of the world.

Jadakiss: His whole swag was just: they loved him on the court, they loved him off the court. AI was like the hood legend that made it. He brought a lot of the hood to the NBA, just with the way he looked, with his tattoos, him being short, him having that killer crossover. That attracted a lot of could’ve-been-negative stuff, but it was just him. He made the people from where we’re from feel like you could make it. He was short, he had braids, he had tats, and he was bustin’ ass. All the other short dudes with braids and tats, that gave them a boost of energy. That opened the floodgates for the dribbling, shooting point guard.

SLAM: And now the League is filled with them.

SLAM: Do you have memories of hanging with AI?

Jadakiss: I’ve seen him spend about $20,000 to $30,000 at the pool area at—what’s next to the Fontainebleau? That hotel used to have a hoop court, and we were playing against Brian McKnight and them. Chuck was just cool. Drinking his Coronas or his Don P, just chill. Real down to Earth. He had his whole childhood crew with him—his uncles, his mans, everybody.

SLAM: Did you ever go to the Fridays outside of Philly that he used to bring everyone to?

Jadakiss: Yeah, I went to one of them Fridays after a game. Philly is like one of my second home, anyways. For me to just chill with him at that Fridays after the game, and see him turn it into a club—wild girls. It was crazy. He did that anywhere. I invited him up here to the games we had in the summer and he caused mass confusion. Came with a couple of Bentleys and his boys. Everybody just ran off the court and ran to where he was at. That’s probably just normal everywhere he go.

SLAM: Have you played ball with any rappers that are particularly good?

Jadakiss: Mase used to be nice. Cam’ron was good. Chris Brown is nice. J. Cole is nice. Wale got game. R. Kelly got game. The Game got game. Trey Songz can play, too. I don’t get in as many celebrity games as I’d like to. Now that All-Star Weekend is gonna be in New York this year, I wanna get in the celebrity game this year, the big one that Kevin Hart’s been getting the MVP in the past two years. Let me get in there and get MVP. 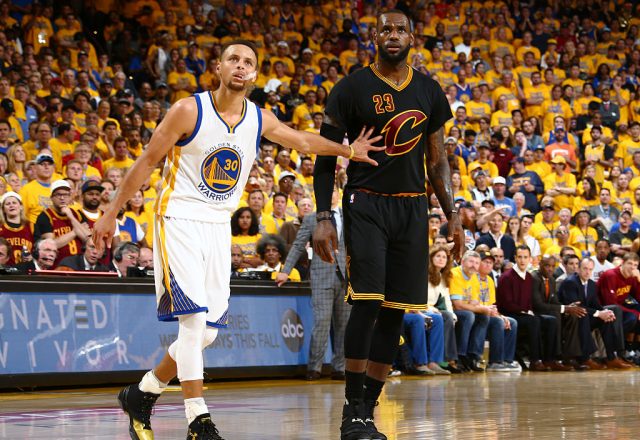 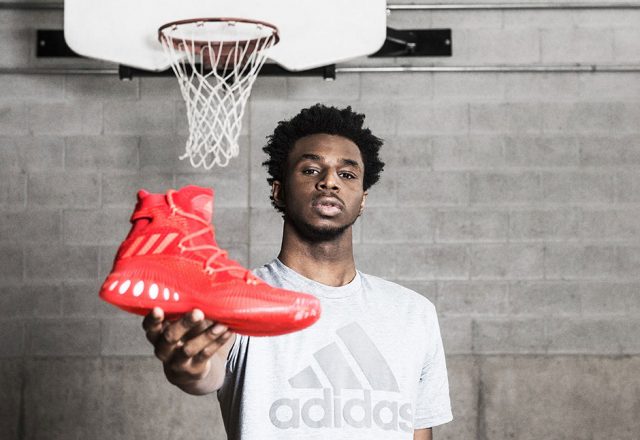 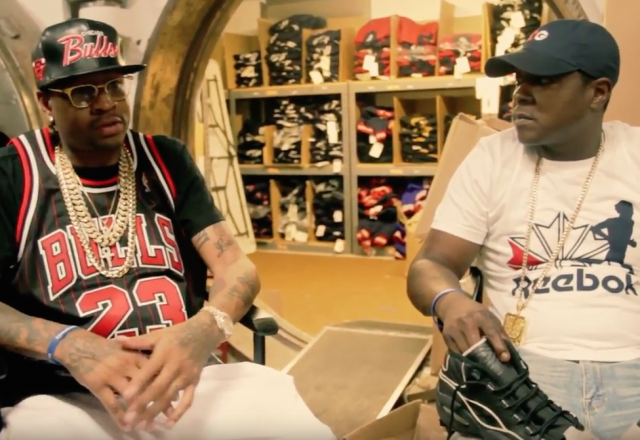 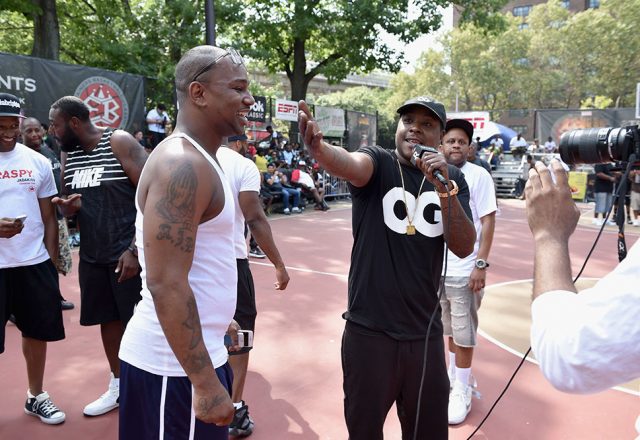 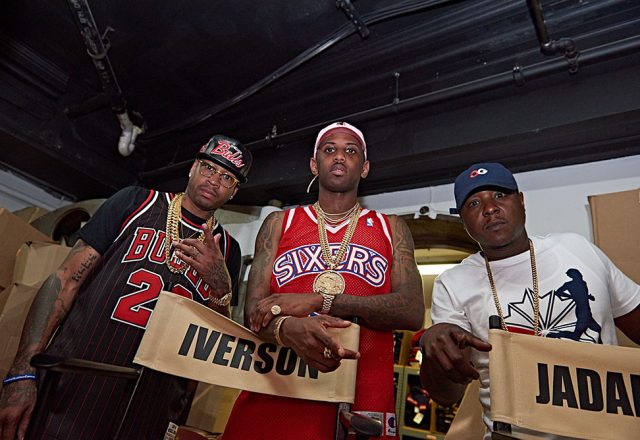 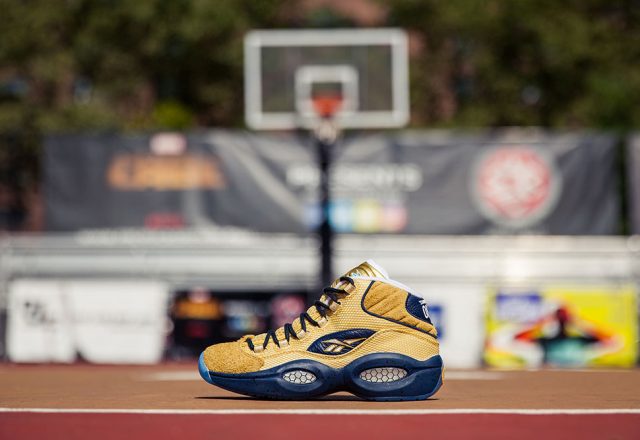