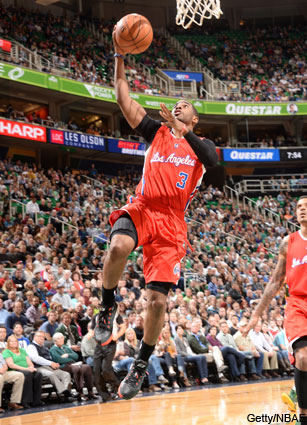 The Bobcats keep churning out wins, this time turning on the offense and shutting down a superstar to get past Minnesota. Al Jefferson powered the O, putting up 25 points and 16 rebounds. The ‘Cats used a team effort to limit Kevin Love’s scoring and to keep him off of the glass, as the All Star finished with 18 points and 6 rebounds, well below his averages. Gary Neal went off for 19 points off the bench, making all three of his triples, while Cody Zeller (10 points) provided a spark by dunking with impunity. Michael Kidd-Gilchrist, one of Charlotte’s defensive catalysts, put up 10 points, 9 rebounds and 2 blocks.

The Wolves got crushed on the glass, 54-35, and shot just 42 percent. Kevin Martin scored 19 points, and Nikola Pekovic (8 points, 4 rebounds) played just 17 minutes as he dealt with ankle soreness.

It sure is nice to have an All Star to handle business when things get dicey. John Wall (21 points, 7-18 shooting, 11 assists) shook off a rough night shooting the ball and took over down the stretch, carrying the Wizards into overtime, where they eventually put the Magic away. Wall went on a personal 8-2 run in the final 1:05, sticking a game-tying 3 with 10 seconds to go to send it to OT. In the extra period, Wall scored another 4 points and Trevor Ariza (21 points, 11 rebounds) hit two 3s to power the Wizards. Bradley Beal chipped in 20 points and Marcin Gortat (19 points, 14 rebounds) and Trevor Booker (11 and 11) both posted double doubles.

Tobias Harris scored 21 off the bench for the Magic, who led by as many as nine points in the second half. Arron Afflalo dropped 18 points on 7-21 shooting, while Victor Oladipo put in 15 in a reserve role.

Plenty of people expect the 76ers to lose every game the rest of the way, and they must might, but they gave the Pacers a run for their money on Friday. Philadelphia hung with Indiana all night, cutting the lead down to 93-90 with two minutes to go before the Pacers pulled away. Paul George put up 25 points to lead Indy, while David West had 18 points and 4 blocks. Despite shooting 58 percent, the Pacers appeared to be sleepwalking through a game they probably they thought had in hand from the time they got off the bus; they turned the ball over 21 times and played sluggishly for much of the game.

Thad Young scored 25 points for the Sixers, but he needed a career-high 31 shots to get there. He set another career best by handing out 10 assists. Michael Carter-Williams sniffed a triple double, finishing with 12 points, 9 rebounds and 8 assists. The Sixers’ losing streak is up to 19 games, only seven losses away from the all-time record.

Toronto ran away from the Grizzlies down the stretch, blowing open a tie game with a big run to finish things off. After the score was tied at 80 with 6:24 remaining, the Raptors reeled off 12 straight points over the course of four-plus minutes to send Memphis packing. Kyle Lowry had 22 points, 12 assists and 7 rebounds against the team that drafted him, showing no fear in attacking the Memphis front line. Jonas Valanciunas went right at the Grizzlies’ bigs as well, putting up a season-high 23 points while grabbing 9 rebounds. DeMar DeRozan hit for 10 of his 16 points in the fourth quarter and Grievis Vasquez scored 17 off the bench, including 5 points in the decisive run.

The Grizzlies had their four-game winning streak snapped as they keep a tenuous hold on a Playoff spot in the West. Zach Randolph went for 16 points and 8 rebounds and Courtney Lee finished with 12 to lead the Grizz.

Phoenix picked up a much-needed win as they fight to stay in the Playoff picture, pulling away from Boston in the final two minutes. The Suns ran off the final seven points of the night, breaking an 80-80 tie to get the W. Goran Dragic scored 20 points, while Eric Bledsoe had a double double with 17 points and 10 rebounds in his second game back from knee surgery. The Suns shot just 42.5 percent on the night, but threw the clamps on Boston and held them to just 31 percent from the field.

Despite their cover-your-eyes shooting performance, Boston hung around thanks to pounding the offensive glass, grabbing 19 of their own misses. Kris Humphries and Chris Johnson both scored 11 points, the only two Celtics in double figures. Jeff Green scored 8 points and missed three 3-pointers in the final minute, while Rajon Rondo finished with 8 points and 8 assists.

The Nuggets picked up their most surprising win of the season, getting the best of the Heat on South Beach. Kenneth Faried led the way with 24 points and 10 rebounds as the Nuggets handed Miami its second straight home loss, the first time all season that’s happened to the Heat. Darrell Arthur scored 18 points off the bench for Denver, leading an excellent effort by the reserves, as the Nugs’ bench outscored Miami’s, 57-40.

Ray Allen (22 points) helped make things interesting in the fourth, hitting two triples and getting fouled on another – making all three free throws, obviously – to help keep the Heat in it. Miami couldn’t overcome a deficit that grew to as high as 16 in the second half. LeBron James finished with 21 points, 6 rebounds and 6 assists but missed a crucial 3-pointer late, while Dwyane Wade chipped in 19. Miami has lost five of six games and has dropped three games behind Indiana for the top spot in the East.

Portland got a much-needed victory in New Orleans, withstanding a career night from Anthony Davis to get their first road win in more than two weeks. Playing without LaMarcus Aldridge, injured earlier in the week against the Spurs, Damian Lillard led the way with 27 points while Nicolas Batum put up a monster line. Batum finished with 22 points, 18 rebounds and 5 assists while knocking down 4-8 from long range. According the the Trail Blazers PR department, only three other players have ever checked off all of those statistical marks in a single game. Wes Matthews contributed 20 points for Portland, who had previously dropped four straight.

Anthony Davis was unstoppable offensively, scoring a career-high 36 points and snagging 9 rebounds. The Pellies went toe-to-toe with Portland all night, holding a lead with six minutes remaining in the game before Lillard took over and scored Portland’s last nine points. Brian Roberts had 19 points for New Orleans, while Eric Gordon and Tyreke Evans both put up 16.

Another day, another win for the Spurs, who somehow someway have crept up to the top of the table and hold the NBA’s best record after winning their ninth straight. Things are quite the opposite for the Lakers, who got blown out yet again and became the first team to be officially eliminated from Playoff contention. The Spurs jumped out to a double-digit lead nine minutes into the game and never let it drop below that the rest of the way. No Spurs starter played more than 22 minutes, and Tim Duncan (9 points, 8 rebounds) and Tony Parker (7 points) played fewer than 30 minutes combined. Six Spurs scored in double digits, five of them off the bench, with starter Danny Green putting up 15 to lead in the scoring column.

The Lakers…well, they held an opponent under 130 points, only the second time in their past six games that they’ve done that. That’s where the positives end, though. Pau Gasol had 18 points and 11 rebounds and Jodie Meeks scored 15 points, but shot 5-17 to get there. L.A. has dropped five of six and sit at the bottom of the West.

The Clippers’ winning streak was in jeopardy against one of the League’s worst teams, but L.A. flipped the switch late in the third to win their 10th in a row. Blake Griffin put up 20 points and Chris Paul shook off a sprained ankle to finish with 18 points and 7 assists. After trailing 68-58 with about five minutes to go in the third quarter, the Clips went on a 22-4 tear over the next six minutes to take control of the game, during which Paul scored 9 points.

The young duo of Trey Burke and Derrick Favors both scored 18 points, while Enes Kanter had 11 points and 15 rebounds for Utah. The Jazz have dropped eight of their last nine games and are tied with the Lakers for the worst record in the West.

The Cavaliers got blitzed in the first quarter, but rebounded quickly and held on the beat the Warriors. Golden State used a 20-5 first quarter run to go up 32-16 after one, but Cleveland won the middle two quarters, 68-39. Spencer Hawes scored 22 points and pulled down 13 rebounds, both tops on the team, while Dion Waiters got hot off the bench and netted 18 points. Kyrie Irving was quiet for much of the game, but turned it on in crunch time and scored 7 of his 16 points in the fourth quarter.

Stephen Curry had his 26th birthday spoiled, but he did manage to drop 27 points and dish out 8 assists in the loss. Draymond Green had 18 points and 9 boards off the bench and David Lee put in 16 points, but the Warriors struggled to create in the halfcourt without sharpshooter Klay Thompson, who missed his first game in two years. Harrison Barnes got the start in his place and struggled, hitting 3-8 shots for 6 points.