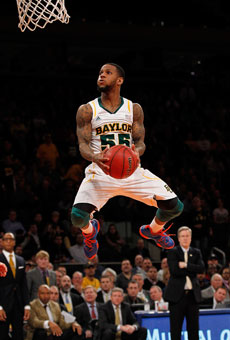 As soon as Pierre Jackson played organized basketball in fourth grade, he knew this is what he wanted to do for a living. That dream is close to becoming a reality as he prepares for the NBA Draft Combine which takes place in Chicago from May 15-19 and the NBA Draft on June 27.

He has had a long and winding road to get where he is today. Jackson, a native of Las Vegas, NV, attended Desert Pines HS and played on the summer circuit with the Vegas Rebels. Jackson was not heavily recruited out of high school—some of that was his own doing because of academic issues early in his high school career and some was just him being overlooked.

He had a very good senior year out of high school and upon graduation, he chose to head to the College of Southern Idaho (CSI), a JuCo powerhouse in Twin Falls, ID. Playing two years of JC ball helped him mature as a person and a player both on and off the court. Jackson wasn’t heavily recruited as a freshman at Southern Idaho, but that all changed during his sophomore year. As a sophomore at CSI, Jackson helped lead his team to an NJCAA DI National Championship, and along the way he was named the MVP of the NJCAA National Tournament. He averaged 18.5 points, 5 assists and 4 rebounds at CSI. Jackson chose Baylor University over a large amount of other high-major suitors.

Jackson found success at Baylor and during his senior year, averaged 19.8 points, 7.1 assists and 3 rebounds per game. He is one of the most athletic and explosive point guards in the 2013 Draft class and has the ability to shoot the ball with range from well beyond the three-point line. Jackson is able to use his quickness and change of speed/direction to get by defenders and break the defense down, which creates opportunities for him to distribute the ball or get to the basket and free-throw line.

Jackson is currently in Houston, TX, training for the NBA Draft Combine with former NBA player TJ Ford. He was able to take a break between his workouts and answer some questions for us.

SLAM: Were there any bumps along the road during your childhood and teenage years that made you question whether you could play basketball at a high level?

Pierre Jackson: In high school, I was ineligible for my sophomore year and wasn’t able to play. That took a lot out of me. I wasn’t sure what to do without the game. I knew I loved basketball and that was the only thing I could see myself doing for the rest of my life, so I had a long talk with my Grandma. She told me that if that’s my dream, then I should do everything in my power to reach those goals. I always thought I was good enough to play at a high level. I knew that there was more to it than just basketball and the most important thing was academics. I took my grades seriously and got back eligible for my junior year of high school and from there I understood the value of academics.

SLAM: Explain your recruitment out of high school. Were you heavily recruited? If not, why?

PJ: My high school career started off great. I played two games of JV as a freshman and moved up to varsity after that. I played varsity the rest of my freshman year, but I hurt myself some by becoming ineligible for my sophomore year. I improved every year and had a great senior year. It was a mixture of grades and being overlooked at the same time. San Diego and Long Beach state were sending mail, but I didn’t’ get many calls, just general recruitment letters. I was very under-recruited and along with being small that caused me to have a chip on my shoulder. It all has helped me in a positive way now and has made me a stronger person and player. I’ve had to work at every level to have success and I feel that this will help me now as I attempt to move on to the highest level of basketball. I’ve had my size questioned my entire basketball career from high school to JC, to Baylor and that has caused me to work even harder to prove people wrong.

SLAM: What were your initial thoughts when you knew you were headed to a JuCo? How did you end up at the College of Southern Idaho?

PJ: During my middle school and high school years, I played with the Vegas Rebels travel team. Starting in seventh grade I played up with the 17U team and one of my teammates was Juan Patillo. Juan was older than me and went to Southern Idaho first. He was like my big brother, and he was a big influence on me. I knew he had a good experience there and I followed in his footsteps.

Juan wasn’t my only influence though, Coach Steve Gosar (head coach at CSI) was a heck of a coach and he taught me a lot. I felt comfortable going to play for Coach Gosar and their program had great history and support. I wanted to be part of the winning environment that they had built there. There was a community and family environment there and I loved it.

PJ: I was really excited to be in college, not just for basketball, but for college in general. I wanted to meet new people. I had never been out of Vegas, so it was an exciting time.

I shattered my elbow going into freshman year at CSI, and I didn’t know how I was going heal. It was tough having to deal with that injury all summer before playing my first year of college basketball. I came back earlier than I should have because the team needed me. I couldn’t’ even straighten my right arm, but I came in and had a big impact on the team in a different way than I was used to.

I couldn’t shoot because of the injury and it was a different role for me. I was used to scoring a lot, but it was a blessing in disguise because I had to impact the game in a different way as a point guard. I had to distribute more, run the team and use my left hand because I couldn’t straighten my right arm all the way. I learned how to take more of a leadership role and became more vocal because of the injury.

SLAM: You won a National Championship, were national tournament MVP and were ranked as the No. 1 player in the country in JuCoRecruiting.com Top 100 in 2011. Looking back on your two years at CSI, how did your two years of JuCo change you as a player and a person?

PJ: Well, my first year really helped me add another dimension to my game. Going into my sophomore year I knew I had to be the leader of the team. I felt comfortable in this role and was able to help younger players develop. Some of the players couldn’t take criticism from the coaches and I helped with that. I learned how to run a team as a point guard and do more than just score. I improved as a player and as a person. Off the court, I made a ton of friends with players and students. It also helped to open up and talk more. I was a very quiet and reserved person when I came to CSI, my two years there in a new environment taught me to be more vocal and outgoing.

SLAM: You went on to Baylor and had a very good two years. Some players struggle with the transition from high school and/or JuCo to high major DI—you were an immediate impact guy. How did you make the transition so quickly/successfully from JuCo to the Big 12?

PJ: I always had a chip on my shoulder because I’m small and was often overlooked my entire life. I had something to prove coming in because of always getting overlooked. Baylor had a lot of good players coming in and I wanted to be part of that. One thing that really woke me up was a talk with Fran Fraschilla early in my junior year. Fran came into one of our practices and I had a bad practice and was upset with myself. Fran gave me some words that made a lot of sense. He was very honest and straightforward with me. Fran said all of my accolades from JuCo don’t mean anything. He told me that if I wanted to be a great player, then I can’t act like a little kid, catch an attitude and pout during practice. He told me to grow up and do what the coach asked of me and everything else would take care of itself. Fran is now one of my biggest supporters, but him being straightforward with me helped me mature on the spot and that really woke me up and helped me adjust to the next level.

SLAM: Different Draft websites have you going in different places. How hard is it to block out all of that and continue to work on your game and stay focused?

PJ: I see it sometimes, but I could care less about that stuff. That’s just the opinion of other people. All I can do is control how hard I work and prepare for the Draft. It’s a higher level, but I’m going to go in and prove people wrong like I’ve been doing my entire life.

SLAM: Now that you are prepping for the NBA Draft, what is a day like in your life?

PJ: 4:45 a.m.: Wake up eat breakfast, stretch and prepare for the first workout of the day

SLAM: If you could say anything to any player right now who may be overlooked or who may have grade issues in high school, what would you say to them?

PJ: For players that are being doubted, you’re going to hear it, it’s going to happen, it’s part of life. Ignore the negative and only worry about what you can control. Work as hard as you can on and off the court. For players having academic issues, you have to decide to put the time in and change things. You just have to commit yourself. There isn’t anything wrong with a junior college. Many people think it’s a bad place, but it was the best thing that could have happened to me. Those two years will really help with your development as a player and as a person.