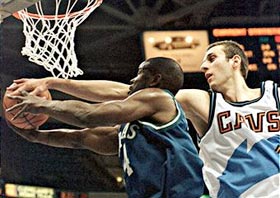 So did you know that in 1989 there were just nine teams in the NBA Draft Lottery? That’s right, because the expansion Miami Heat and Minnesota Timberwolves came to fruition in 1990, thus creating an 11-team lottery until 1996 when the Vancouver Grizzlies and Toronto Raptors came in to the League and pushed the lottery up to 13 teams. Finally, when the Charlotte Bobcats came about in 2005 we entered the modern day lottery system that we now watch on TNT every year during the Playoffs.

What’s the point? Each and every year teams draft in the lottery and miss out on players who become formidable in the League for years to come. Going back to 1989, what I have decided to do is rank the players who have been drafted outside of the lottery—whether it was outside of the top nine in 1989 or outside the top 14 in 2005.

There is no single way to accurately rank these players, so what I decided to do was take a look at statistics and combine those with the individual players’ overall career. For example, Derek Fisher might not have the best numbers on this list but the way he plays the game and the championships he has been a part of helped drive him up this list in to the top.

One other thing I’d like to mention is that it is tough to weigh the potential of current players against the lengthy careers of some of the guys on this list. With that being said, I did the best job I could of placing the younger guys where I thought they deserved to be on this list based on their production to this point and their potential for the future.

30. Rodney Stuckey | Drafted by Detroit Pistons | 2007 Draft | 15th Overall
It’s fitting that a player taken just outside the modern lottery is the guy who will start this list off. The Detroit Pistons made Stuckey their man with the 15th overall pick in the 2007 Draft. In his sophomore season at Eastern Washington, Stuckey averaged 24.6 points, 4.7 rebounds, 5.5 assists and 2.4 steals per contest, proving that he was a capable scorer and leader in the process even though he was at a mid-major school. Since the Pistons shipped Chauncey Billups out west to Denver, the team has been his to run, where he has averaged 13 points and 4.3 assists per game while trying to help his squad return to the Playoffs. Stuckey has lots of skill and could definitely move up this list in time.

29. Andrei Kirilenko | Drafted by Utah Jazz | 1999 Draft | 24th Overall
AK-47 isn’t great in one particular area and that is exactly what makes him special. The Russian small forward was selected 24th by the Utah Jazz in the 1999 Draft and has proven his worth since, although he has been marred by inconsistency at times, especially at the offensive end where he has a career average of 12.4 points. But the reason he is valuable isn’t because of his offense but rather his defensive prowess—he has averaged 2.1 blocks and 1.4 steals per game for his career and is very versatile. Kirilenko makes winning plays and hustles constantly and for that, he just barely makes this list.

28. Josh Howard | Drafted by Dallas Mavericks | 2003 Draft | 29th Overall
Howard attended Wake Forest for all four years of school, increased his scoring every year until he had a career high of 19.5 points per game his senior year and shot 48.3 percent from the field overall. I remember watching him a few times when he was in college (and I was young) and saying that I thought he was a very good player who co

uld do a little bit of everything out there. Still, Howard went 29th overall to the Dallas Mavericks in the 2003 Draft. Off the court he has had his fair share of issues but on the court he has been pretty consistent as a role player, averaging 15.3 points, 6 rebounds a game while also guarding the other team’s most potent scorer most of the time.

27. Zydrunas Ilgauskas | Drafted by Cleveland Cavaliers | 1996 Draft | 20th Overall
Z was drafted 20th in the 1996 Draft by the Cavaliers. He has averaged double figures in 11 out of 12 seasons and all of them have come in Cleveland for the Cavaliers, so consistency is definitely the key word for Ilgauskas. A native of Lithuania, Big Z might not be as athletic as other big men but he is certainly more consistent in pick-and-pop situations than your average center. Next season will be different for Ilgauskas—he has decided to follow his former teammate LeBron James to South Beach in the hopes of winning a title. If he stays consistent for the Heat he will be a major help from the outside.

26. Hedo Turkoglu | Drafted by Sacramento Kings | 2000 Draft | 16th Overall
The product of Turkey was drafted 16th overall in 2000 by the Sacramento Kings where he played alongside fellow list mate and European import Peja Stojakovic. He played well in Sacramento given his role and playing time but really started to come on once he reached the Magic in 2004. He played an integral part in helping them to reach the Finals in 2009 abilities to perform in isolation situations and clutch shooting on display. He sought a bigger contract and took on a much tougher role in Toronto last season where he struggled but is on the verge of being traded to Phoenix, where he should thrive in their up-tempo offense.