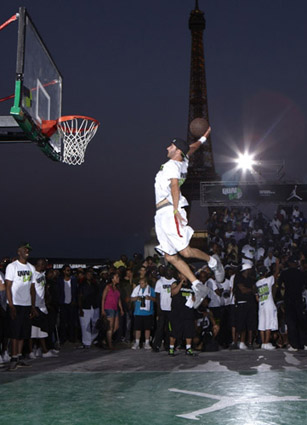 On a sweltering June morning in Paris, a provisional blacktop bedecked with the Jordan Brand logo under each basket sizzled as if it were a skillet prepped for frying bacon. The scene was the Trocadéro, which crowns the Chaillot Hill and offers a breathtaking view of the Eiffel Tower. The event was the most known unknown streetball tournament in the world, Quai 54. About to open the doors to the public, Quai 54’s founder, Hammadoun Sidibe, instructs his retinue as they let in thousands of fans that had been waiting since 4 a.m. to take part in the hip-hop hoops spectacle. Not too many years ago, before Quai 54, the Entertainer’s Basketball Classic at Rucker Park was every streetball fiends’ summer hooptopia. But now, in its fourth straight year with the backing of Michael Jordan’s shoe empire, the international tournament with modest beginnings at 54 Quai Michelet de Levallois in the suburbs of Paris has become the juggernaut of street basketball in Europe.

“Jordan Brand looked at it as an opportunity to help take the game of basketball global as well as show the rest of the world that the brand was going global,” says Gentry Humphrey, GM of Jordan Brand International. “It was a natural thing to do and I think the partnership has been great and every year we’ve tried to up our game a little bit. I think when you take a look at where we are today, it’s going be hard to top next year, but we’ll see.”

The synergy between Jordan Brand and Quai 54 has vaulted the one-of-a-kind event to the next level. The only tournament to ever get its own custom Jordan Brand shoe, the two-day Quai 54 is now a platform for players who are getting the opportunity to double as tastemakers.

“This year is special for me because of the people, the event, the Eiffel Tower location and to be able to have our own special shoe,” says Sidibe. “It’s a Jordan V Retro, a classic with a special colorway just for us. The great thing is Jordan Brand had a great vision for the Quai 54. They saw what we did with the international teams and decided that they have business in all of those countries…They drive us in a good way and we drive them in a good way. I am very proud to be sponsored by them. I want them to sponsor us forever.”

Over the course of two days, streetball legends and pro ballers on 16 teams from all over the globe—the Netherlands, Belgium, Japan, Latvia, Canada and the US, among others—donned custom Jordan Brand uniforms and Quai 54-exclusive, limited edition Air Jordan V Retro and Jordan Iso II kicks to play in an elimination-style competition.

“We partnered up with Foot Locker Europe’s House of Hoops and created a special outdoor shoe for this event called the Iso II,” explains Humphrey. “Three years ago, we introduced the first theme where we tried to combine the sport of basketball along with something that represents Paris: The Wine and Grind. We did the elements of fine wines with the grind of the basketball court and we did two shoes for that event. The second year we introduced the Air Jordan I and we had this burst of color that was kind of a big influence with it and we did that with an outdoor basketball shoe. This year, we came up with the theme of the blending of two worlds…The colors are bright and we applied that to two shoes: the outdoor basketball shoe in black and green and then the Air Jordan V in a special black and green. Usually, we don’t do any Retros for special events, but because we have a big focus in this particular tournament, we decided to introduce Retros in this event.”

The legendary Air Jordan V Retro has a classic premium tumbled black leather upper with luminous green accents on the lace tabs and outsole. The Jumpman adorns the tongue and back of the shoe, as per usual, and has the Quai 54 logo embroidered on the side. Unsurprisingly, these hard-to-find Jordans have sneakerheads foaming at the mouth.

“This year for the Retro V, we only offered it in the white base all throughout Europe, that’s it,” says Humphrey. “Then we did a limited edition version in black and green and we only did 54 pair, for Quai 54 players as well as special guests of Quai 54 and influencers within the Jordan Brand. So unless you buy them online or from a special store in Europe, you can’t get these in the US.”

Shoes laced and tightened, legions of basketball enthusiasts sardined into the venue as the first jump ball of the 2011 Quai 54 was tossed into the baking Parisian sky. As the players played and the fans cheered, a 13-year-old named Ibrahim refereed. Diminutive and skinny, the impish ref, Q-Tipped with a fresh pair of true blue Air Jordan IIIs, doled out fouls and charges like a young Steve Javie. The games were played under FIBA rules and one motto: Bring Your Game, Not Your Name.

“This tournament started out in the hood,” says Nhamo Shire, founder of the famed Midnight Madness tournament in England. “Look at the genesis of Quai 54 over the last five years. You’ve got teams now coming in from Japan, China and now it’s truly global and people have the awareness of this tournament on a global level. The brand awareness is through the roof. The swag is on a million right now, it’s ridiculous. It’s come from humble but authentic beginnings. It wasn’t about putting on a tournament to floss, it was about competition. It’s just that right timing, right place and Jordan Brand jumped on it because it’s like a boutique brand, and Paris is like a boutique city, and so I think those combinations just exploded.”

Shire reiterates that Quai 54 is about a lot more than basketball and sneaks, though. “You have the basketball here, obviously, but you’ll see the dancing, the MC-ing, double dutch, all the elements of our culture that is now mainstream. We never had that in Europe, so it’s a big thing.”