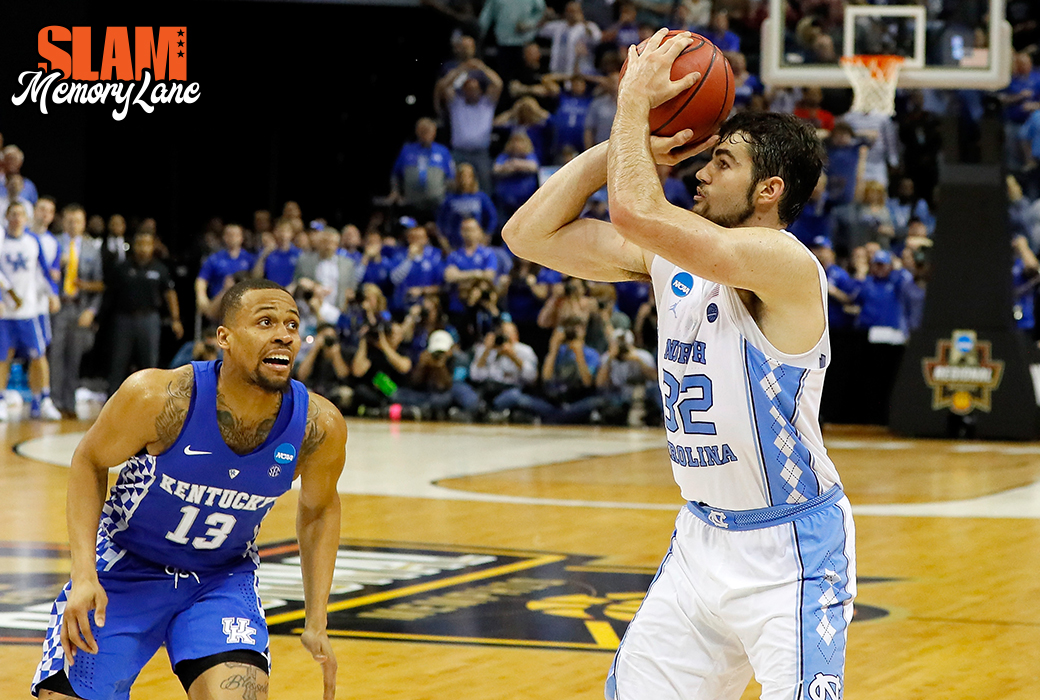 Chaos. Fans jumping up and down like it’s a dance party. Bench players climbing on each other. Players sprinting down the floor, their heads swiveling to find their defenders.

Amidst the frenzy, North Carolina guard Theo Pinson snaked his way down the court between Kentucky defenders. 7 seconds left. Tie game. A chance at the 2017 Final Four on the line. Was Roy Williams not going to use a timeout? Forget it. Not enough time to think.

Pinson streaked across half-court. Reckless, but somehow in control. Nothing in sight. 5 seconds.

Pinson raced into the lane when, finally, a white jersey emerged. It was Luke Maye, the burly sophomore walk-on, who had only started one game the entire season and averaged a mere 5 points per game. Maye retreated towards the three point line, creating just enough space for Pinson to hand off the ball. 3 seconds.

It was barely enough time for Maye to wind up. It didn’t matter. Maye released the long midrange shot as he backpedaled. The shot was pure. 75-73. The Tar Heels were going to the Final Four.

Those awards would go to Malik Monk. Monk was the epitome of Kentucky Wildcats basketball. A top 10 recruit. Flashy and swaggy. Unafraid to shoot from anywhere on the court. Monk, the team’s leading scorer, didn’t care that, up until a minute left in the game, he had shot just 2-8 from the field for 6 points. If it was possible to take a shot, he would.

With 46 seconds remaining in the game, the Wildcats regained possession down 4 points. The play was set up for De’Aaron Fox. A little dribble hand off. It quickly blew up. Two passes later, Monk caught it near the top of the key. He took one dribble to the left and pump faked. Pinson went flying through the air. Monk rose, faded and let it go. He didn’t even need to hold his follow through. Money.

The rest of the game was a whirlwind. With 14 seconds left, the Wildcats got the ball back after a rare five second violation and a missed free throw by Justin Jackson, the ACC Player of the Year. This time, the Wildcats were down 3.

As Kentucky guard Isaiah Briscoe pushed the ball down the floor, everyone in the gym knew it was going to Monk. The wiry guard came off a hand-off and then a screen. Two Carolina defenders were right in his face, denying him any space to shoot. But Monk didn’t hesitate. He jumped into the air, his body flailing in every direction as he tried to get off the shot between the 6-7 Jackson and 6-8 Maye.

Monk did get it off. And it went right through the net. “An impossible shot!” yelled the announcer. Tie ball game.

That’s when Pinson, without pausing, made his pursuit down the court and Maye etched his name into March Madness history.

This game was what March Madness is all about: pure chaos.

Broken plays and wild shots. Nothing any coach could script. Just ten 20-year-olds playing basketball, somehow blocking out the deafening noise of 17,794 fans and making split second decisions to fire up shots they’ve never once practiced that find the bottom of the net. It was an ending that, even in a movie, would seem unrealistic.