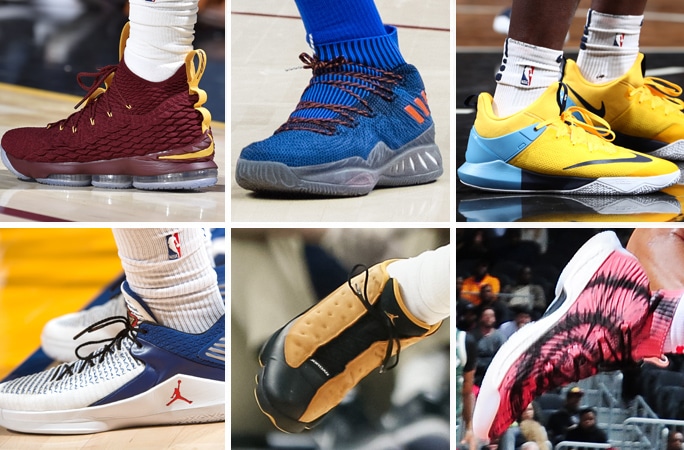 Getting right into Sunday’s best NBA kicks, we start off in Cleveland as LeBron James rocked yet another PE colorway of his Nike LeBron 15, this time donning an almost all-wine colorway. Jeff Green also continued his string of PEs as he once again went with the Air Jordan XXXII while Dwyane Wade rocked another fresh make-up of his Li-Ning Way of Wade 6.

Lance Stephenson might’ve had the sneaker of the night as he wore the Air Jordan XIII Low “Chutney” in the Pacers win over the Spurs and Malik Monk is establishing himself as one of the League’s premier “Kobe” heads as he wore the Nike Zoom Kobe 6 FTB. Tauren Prince continues his strong rotation of adidas as he donned a red tie-dye colorway of the adidas Crazy Explosive Primeknit 2017. And one last stand out of the night goes to Paul Millsap as he rocked an eye-catching pair of the Nike Zoom Shift.

Peep the rest of Sunday’s gems in our latest gallery.

Related
Post Up: Big Upsets in Cleveland and Golden State