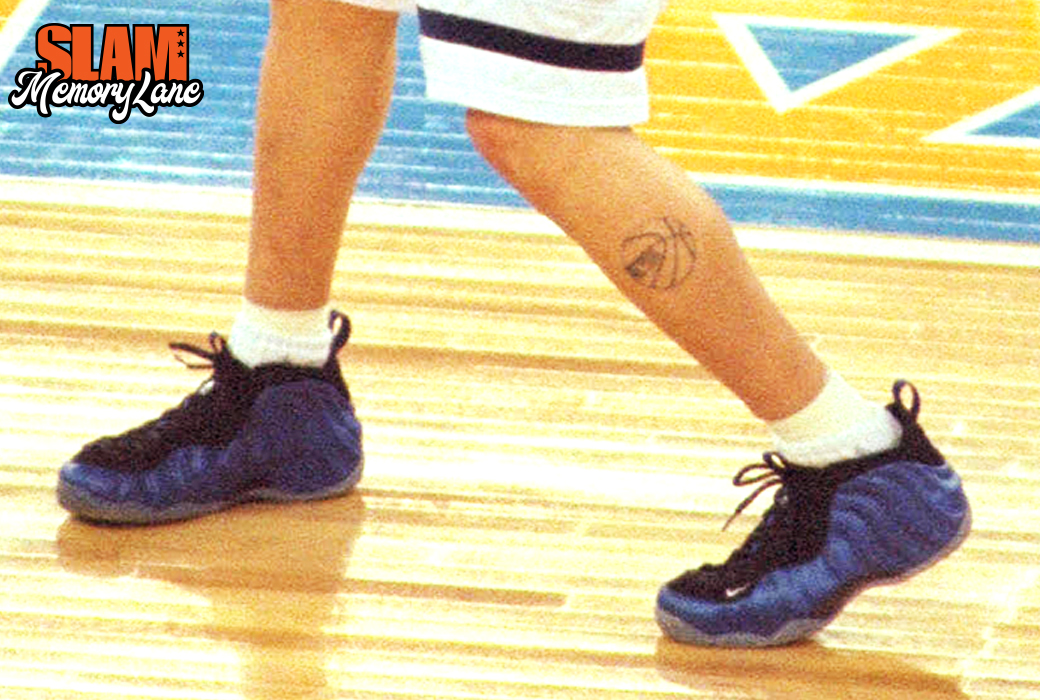 The Wildcats won the national chip in 1997. They came back from a 10 point deficit late in the game, forced overtime and won it by five. It was dramatic and entertaining and blah, blah, blah…

The important thing is that a few of them debuted the Nike Air Foamposite One. The Foams were made for Penny Hardaway but the Cats got ‘em first, leaving an extremely, extremely important footprint on the way to etching their names in the history of the NCAA.

“Eric Lautenbach came to our team,” Mike Bibby told us a few months ago. “It was the first year we were there and he came and sat everybody down and said, ‘I got a shoe that no one has seen yet. It’s not your team color.’ Back then you matched your shoe with your uniform. It’s not like nowadays where everybody wears a different color just to be different.

“‘It’s not going to match your uniform. It’s up to you guys if you guys want to wear it.’ I said, ‘Hell yeah, I’m wearing them.’ A few guys wore them. I think Jason Terry wore them, I think Quynn Tebbs wore them, a few guys that sat on the bench wore them. But that was it, really. He got a shoe that’s not our color, hasn’t come out, no one has seen it yet. ‘It’s up to you guys if you want to wear them.’ You know I wasn’t turning that down.”

The visionary Eric Avar, who would go on to work with Kobe Bryant on his signature line, led the charge on the first Foamposite. Its upper was made out of a hard plastic shell while carbon fiber sat below in the midsole. The sneaker was far ahead of its time.

“I wasn’t sure I was even going to show that sample to him,” Avar said about Penny. “We had other ideas we were presenting. But he leaned over, looked into the bag and said, ‘What is that?’ He reached in, grabbed it and he says, ‘This is my next shoe!’ I was like, ‘Okay! There’s the go-to-market strategy!’”

Maybe it was the perfect storm of the Cats being wild cool and Penny playing ball like a stampeding horde of wild horses. Or maybe the Foams would’ve taken off regardless of who was rocking them on the court. Whatever the reason is, the Foams were launched into basketball footwear lore, climbing to heights that nobody could’ve predicted.

The DMV, made up of Washington DC, Maryland and Virginia, is now synonymous with Foamposite silhouettes, like New York is known for wearing Air Force 1s. Foams have their own geography now.

When the cartographers eventually write it all down, that geography started out in 1997 at the RCA Dome in Indianapolis when Bibby, Terry and the Cats broke everyone’s necks.