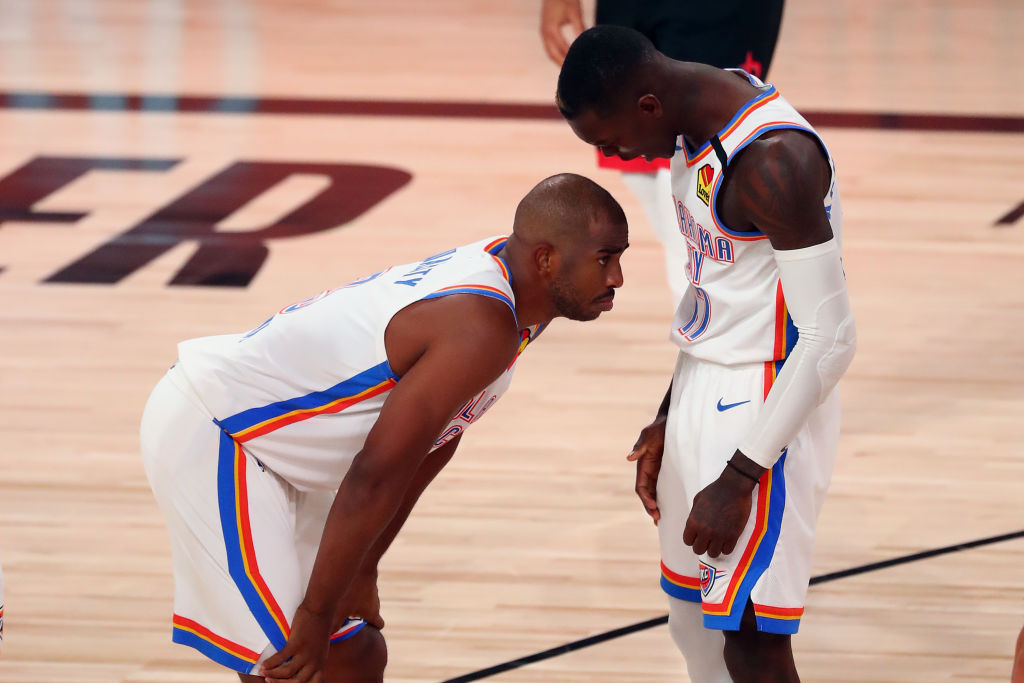 While the majority of Monday’s games went the way momentum would predict, the Oklahoma City Thunder withstood a record-setting barrage of three-pointers from the Houston Rockets to knot their first-round series at two games apiece.

We broke down each of the day’s games below.

The Magic hung around with the Bucks for the first half of their Game 5 battle but in the fourth and final quarter of the contest it was all Milwaukee. Giannis Antetokounmpo continued to fill the stat sheet in a modest work load (31 points, 15 rebounds and eight assists on .667 shooting) and Khris Middleton chipped in with a series-best 22 points and 10 rebounds. It’s little consolation but Orlando is the only underdog opponent still alive in the first round of the Eastern Conference bracket.

The Thunder survived a three-point rampage from the Rockets and a particularly impressive offensive showing from James Harden to tie their first-round battle at two games apiece. Houston shot a playoff record 58 threes in the game, netting 23 of them and even began to pull away in the beginning of the second half. Despite the monster 32-point, 15-assist night from Harden, Oklahoma City began to chip away over the course of the second half as veterans Chris Paul and Dennis Schroder used and abused any defenders sent their way – including the aforementioned bearded one. Paul and Schroder combined for 56 points, including a number of critical buckets late in the close game and actively sought out and attacked Harden off the dribble. The knotted series is one of the most intriguing of the first round and should only get better.

The Heat snuck out in front of the Pacers and never looked back on Monday, completing their four-game sweep of the technically favored No. 4 seed. Miami took and held the lead thanks to contributions from across the spectrum as the hoops world at large is left scratching their heads wondering just how deep and how good the Vice City squad really is. Veteran Goran Dragic led the Heat with 23 points while Bam Adebayo added 14 points, 19 rebounds and six assists of his own. Jimmy Butler, who entered the game with a sore shoulder was able to log just 23 minutes in the series finale. Myles Turner, Victor Oladipo, T.J. Warren and Malcolm Brogdon combined for 81 of Indy’s 87 points in the loss.

The Lakers sprang out to a 15-0 start against the Blazers and didn’t look back. Los Angeles had 80 points at half time and cracked 100 with minutes to spare in the third quarter. LeBron James’ 30 points, six rebounds and 10 assists came in just 28 minutes of action while Anthony Davis add 18, 5 and 5 in just 18 total minutes. Portland got a solid 20 points and 13 rebounds from the violent dunking Jusuf Nurkic but they trailed by nearly 40 before L.A. started to let their foot off the gas. The Blazers will face elimination in Game 5 and may have to do so without star guard Damian Lillard. To add injury to insult, Dame left the blowout in the third quarter with a knee injury.