Top 20 Basketball Sneakers of the Past 20 Years: Air Jordan XX

Since the debut edition of KICKS hit newsstands in 1997, NBA Stars have graced the hardwood in countless fire sneakers. To celebrate KICKS’ 20th anniversary, we’re counting down the 20 best we’ve seen over the past 20 years—and the moments that defined them. At No. 15 is the Air Jordan XX, which marked Tinker Hatfield’s return to the Jordan Brand design team. –Ed.

The Sneaker: By the 20th sneaker in the Air Jordan line, consumers were ready to be skeptical. Perhaps the public thought the Jumpman line had already innovated in every possible way—that there was nothing left to do. Plus, Mike was long gone from the League by 2005. But with Tinker Hatfield returning as the AJ XX’s lead designer (he’d last worked on the XV), something totally unexpected was born. Tinker drew on MJ’s love for motorsports and cycling to create a midfoot strap and heel ankle support designed for free range of motion, and he also introduced Independent Podular Suspension technology. 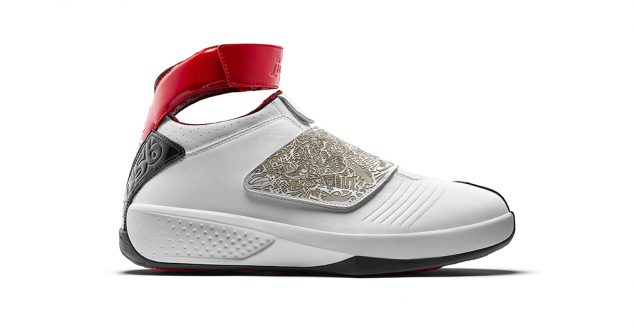